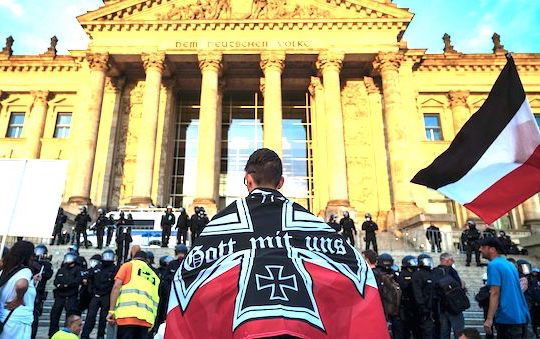 Several hundred protesters, some allegedly associated with an ‘antisemitic’ movement that believes today’s German government is an illegitimate entity imposed by the Allied occupying forces after WWII , stormed through a group of police officers to the doors of Germany’s parliament building in Berlin before being removed by other officers, according to the Jewish Telegraphic Agency:

The demonstrators from the Reichsburger (Reich Citizens) movement were among some 38,000 people who showed up for a mostly peaceful rally Saturday to protest the country’s coronavirus restrictions.

The Reichsburger, which had some 16,500 members as of two years ago, has been described as an assembly of groups and individuals who sometimes espouse violence in their “fight against the Federal Republic of Germany.” They believe that the 1937 German empire still exists, and many of them deny the Holocaust happened.

Several hundred were arrested in incidents at both the Reichstag building and the nearby Brandenburg Gate, where protesters, allegedly instigated by right-wingers, reportedly threw stones and bottles.

Josef Schuster, head of Germany’s Jewish umbrella organization, the Central Council of Jews in Germany, said he saw the incident as “a last warning shot for democratic parties and security officials.”

“To see people with symbols of right-wing extremists on the steps of the Reichstag is unbearable for those who care about democracy,” Schuster said.

Among those arrested was celebrity vegan chef and cookbook author Attila Hildmann, who has been spreading coronavirus conspiracy myths at rallies for months. He has also pushed anti-Semitic conspiracy theories online.

Germany’s commissioner on anti-Semitism Felix Klein said a line had been crossed and that protesters evoked the “worst memories.”

We first reported how the Jewish press were trying to smear peaceful corona protesters as ‘antisemites’ back in June, and they obviously are picking up that canard and running with it.

The headline to this original JTA article states, “Hundreds associated with anti-Semitic movement attempt to break into German parliament building,” making it sound like the “Nazis” have risen from their graves and are re-enacting their peaceful and legal takeover of the Reichstag in the 1930s by popular vote.

The Jewish press has coined a new phrase for these protesters — “coronavirus deniers” — a false equivalency with so-called “Holocaust deniers” — who can now be lumped in with “global warming deniers“.

But, of course, since “Holocaust deniers” are actually people who can think for themselves — including many Jews — so perhaps calling these coronavirus protesters “deniers” is an unwitting compliment.

We know that anyone who objects to the Jewish version of reality is, by definition, an ‘antisemite’.

If you don’t believe what the Jews put on your television, chances are you are two steps away from denying the Holocaust, rounding up all the Jews, and throwing them in fictitious gas chambers — or at least, that’s how they feel:

But when you dominate and control society the way the Jews do — the way they admit they do — you’ll always be looking over your shoulder wondering when the “goyim” are going to wake up and “storm” your halls of power with pitchforks and tiki torches.

As Shakespeare observed in Henry The Fourth, Part 2, “Uneasy lies the head that wears a crown.”