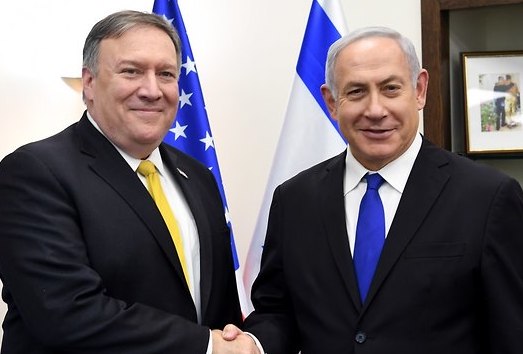 Secretary of State Mike Pompeo raised the issue of Holocaust-era property restitution during his first official visit to Poland:

Poland is the only country in the European Union that has not passed comprehensive national legislation to return, or provide compensation for, private property confiscated by the Nazis or nationalized by the communist regime.

At a joint appearance Wednesday in Warsaw with the Polish minister of foreign affairs, Pompeo praised the U.S.-Poland relationship and the “indomitable Polish spirit.”

He also saluted Polish Jewish partisan Frank Blaichman, who immigrated to the United States after World War II and became a prosperous real estate developer in New York. Blaichman, who died in late December at 96, was “a testament to the resilience of the Polish people, Pompeo said.

As part of his remarks, Pompeo called on the Polish government to resolve outstanding restitution issues.

“We also appreciate the importance of resolving outstanding issues of the past, and I urge my Polish colleagues to move forward with comprehensive private property restitution legislation for those who lost property during the Holocaust era,” he said.

Gideon Taylor, chair of operations for the World Jewish Restitution Organization, said he welcomed Pompeo’s “expression of his commitment to securing justice for Holocaust survivors and their families. This is a powerful affirmation of the importance of this issue to the United States.”

This shakedown is all part of the recent diplomatic fight between Poland and Israel over Poland’s alleged “complicity” in an alleged “genocide” that may or may not have taken place during World War II.  The Jews keep insisting that the Poles were complicit so that they can then demand billions in reparations from the Poles, but the Poles know full well the game the Jews are playing, and they are having none of it.  And, no, the Poles are not going to listen to Pompeo’s pandering to jewish interests.

On the one hand Pompeo flatters the Poles and their “indomitable spirit” but then questions that same spirit when the Poles refuse to be dominated by international Jewry and their billion dollar extortion racket.  The Poles understand the machinations of the Jews far better than most other European nations because they have had much more experience in dealing with them firsthand. And it looks like the Poles may have won this round with the Jews, as they seem to be backing off on this issue, at least for now.