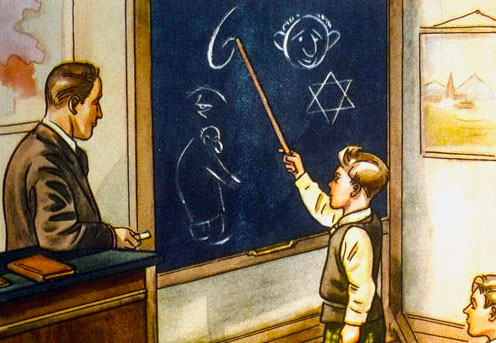 The bipartisan bill seeks to introduce Holocaust studies into the curriculum of the US education system, and establish a federal fund that would provide teachers with the resources and to teach the horrific details of the Holocaust and its consequences, as well as develop textbooks and seminars on the subject. The bill comes in the wake of a recent wave of anti-Semitic attacks in the US.

Speaking to the media at the Center for Jewish History, Maloney—accompanied by Israel’s Consulate General in New York Danny Dayan—said the legislation is an important step in combating the rise of anti-Semitism in America.

“The rise of anti-Semitism in our country is extremely disturbing and I am terrified of the fact that people have walked through the district I am privileged to represent and have been beaten up and hurt because they are Jewish,” Maloney said. “We need to take proactive steps to combat this hatred. We must begin educating people, especially our young people, about the horrors of the Holocaust and how hate, evil, intolerance and ignorance can lead to mass murder..”

According to the Anti-Defamation League—a Jewish non-profit that fights racial hatred in the US—there has been a 60% increase in anti-Semitic incidents in the country between 2016 and 2017.

“Charlottesville, Pittsburgh and the recent physical assaults on Jews in Brooklyn require profound educational reform,” said Danny Dayan. “This legislation will lead to a revolution in Holocaust studies in the United States, and prevent a new generation from forgetting the past, which is essential for a secure future.”

“The reality in which the majority of the young people in the US are not aware of Auschwitz, is distorted and must be rectified. This will allow the American students to understand what anti-Semitism can ultimately lead to,” added Dayan.

For the last 40 years the jewish-controlled media and educational system has flooded us with pro-Holocaust propaganda.  Literally every day we are reminded of the “unique” suffering of the Jews during World War II.  We are constantly reminded that a potential genocide is set in motion every time a Jew is called an unkind name somewhere in the world.  And in many White countries, you can now be sent to prison for questioning the jewish version of WWII.

Contrary to what the Jews believe, more mandatory education about the Holocaust will not reduce antisemitism.  After all, 40 years of it hasn’t worked yet, so why keep doing it?  If anything, making belief in the so-called Holocaust mandatory in America’s schools will do nothing except create more skeptics and ultimately more antisemites.  The last thing the Jews want is for people to look too closely into the historical details and start asking uncomfortable questions.