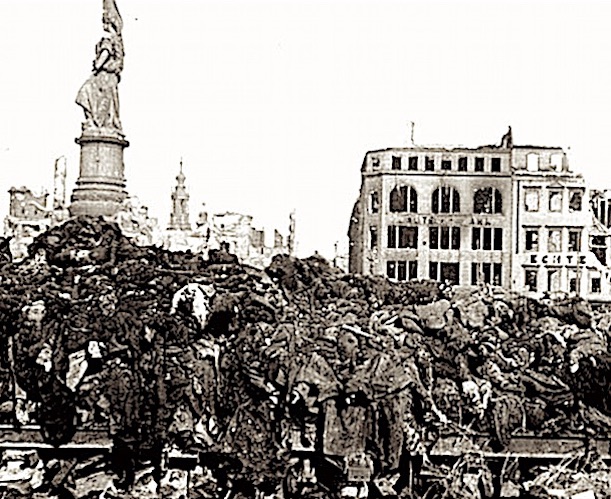 (Times Of Israel)  Germany marked 75 years since the wanton and unnecessary destruction of Dresden at the end of World War II — February 13th, an anniversary seized upon by the so-called ‘far right’ to allegedly inflate real victim numbers and downplay alleged ‘Nazi’ crimes against Jews:

President Frank-Walter Steinmeier will give a speech at Dresden’s Palace of Culture, walking a fine line between remembering those killed in the Allied air raids on the eastern city and stressing Germany’s responsibility for the war.

Afterwards, he will join thousands of residents in forming a human chain of “peace and tolerance” as church bells ring out…

As in past years, the commemoration events are set to attract neo-Nazis, while the far-right AfD party will man an information booth to tell the supposed “truth” about the bombings.

Police are also bracing for a large demonstration by right-wing extremists on Saturday, as well as counter-protests.

“The myth of the ‘city of innocence’ lives on,” the regional (((Saechsische Zeitung))) daily wrote, accusing the far right of using the commemorations “to minimize German war crimes.”

Hundreds of British and American planes pounded Dresden with conventional and incendiary explosives February 13-15 in 1945.

The ensuing firestorm killed some 25,000 people, (((historians))) have calculated, and left the baroque city known as “Florence on the Elbe” in ruins, wiping out its historic center.

The devastation came to symbolize the horrors of war, much like the heavily bombed city of Coventry in England.

But in Germany, Dresden also became a focal point for neo-Nazis who have held “funeral marches” for the dead and given the city a martyrdom status that experts say is belied by historical facts…

…In the immediate aftermath, Nazi propagandists claimed over 200,000 people had lost their lives in Dresden — even though historical records showed early on they had simply added a zero to their estimates.

Despite the evidence to the contrary, he said he believes the victims numbered “around 100,000,” prompting critics to accuse him of historical revisionism.

In an original article from The Advertiser, Adelaide, Tuesday 6 March 1945, the firebombing of Dresden was described as a “Holocaust”, and this was long before the Jews had co-opted and essentially copyrighted that term to describe their own demonstrably fictitious atrocity propaganda campaign.

According to the article, “The Dresden catastrophe is without precedent. There were a million people in Dresden on the night of February 15, including 600,000 refugees from the east. Raging fires spread irresistibly in the narrow streets, killing a great many for sheer lack of oxygen. Even identification of victims was hopeless.”

“Two more British formations appearing on the blood-red horizon after midnight, spread further devastation and added to the holocaust. The town area is devoid of life and the buildings are beyond reconstruction. Dresden has been wiped from the map of Europe.”

And to add insult to injury, the Jews have been caught numerous times trying to pass off photographs real victims of the holocaust in Dresden as Jews killed by the Germans in the so-called ‘death camps’.

It was pure, unadulterated bolshevik psychological terror against a people whose only crime was daring to stand up to the jewish bankers and take their country back for themselves.

British historian, David Irving’s devastating book, Apocalypse 1945: The Destruction of Dresden, is essential reading for anyone who wants to understand the truth of what happened at Dresden without the interference of self-serving jewish propaganda.