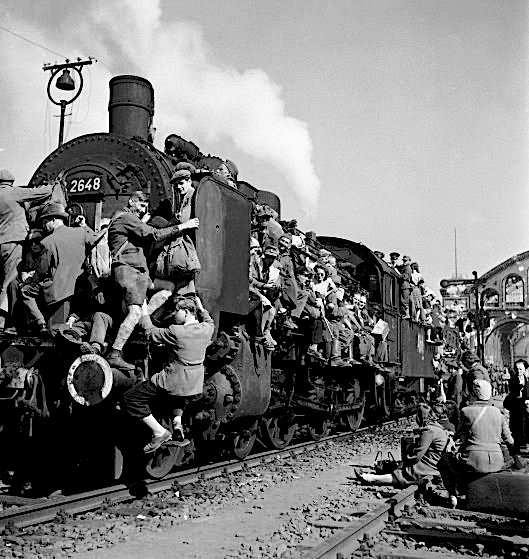 The Jews seem to be systematically going through all of Europe and suing all the railway systems for allowing themselves to be used by the German occupying forces during World War II, and this week they are suing Belgium:

Descendants of Holocaust victims in Belgium are pressing the country’s railway company SNCB to compensate them for its role in the deportations of Jews during the Holocaust and follow the examples of France and the Netherlands.

Between 4 August 1942 and 31 July 1944, 25,628 Jews and Gypsies from Belgium were deported from the Dossin barracks in Mechelen to the Auschwitz-Birkenau camps. 28 convoys were chartered by the SCNB, making the Dossin barracks the antechamber of the death camps.

Narcisse Rulot, the director of SNCB at the time, was considered anti-Semitic and pro-Nazi. Campaigners say his complacency in allowing the Germans to transport Jews via SNCB greatly aided in the suffering and deaths of thousands of people. “I carry everything that comes, he said, I do not look what is in the closed cars”.

The Belgian railway apologised in 2012 for its wartime role but for many relatives of victims this was not enough.

According to Nico Wouters, a historian and expert on the topic, the archives that would prove the railway’s part in the deportations are missing, most likely having been destroyed. ‘’Legally, we are in limbo, we do not know precisely the procedure set up by the Germans for the execution of deportations by the SNCB,’’ he added.

Those who have looked into this issue agree that the directors of the time did nothing to prevent the deportation of Jews from Belgium.

SNCB said claims for compensation are a matter for the Belgian Minister in charge of mobility, François Bellot. He is due to meet representatives from the country’s Jewish community shortly to discuss the issue.

In 2014, France paid €50 million ($57 million) to victims who had been transported to death camps by the national railway SNCF trains during the Holocaust. The Netherlands made the same move in 2018, acknowledging its state-owned rail company’s role in delivering thousands of Jews to their deaths.

If Jews want to dispel the antisemitic “canard” that they love money, maybe they should stop suing everyone in sight for some alleged event that may or may not have occurred 75 years ago.  To date the Jews have received untold billions in compensation, but that’s still not enough.  And it’s not just so-called “survivors” who are making these demands, it’s also their children and grandchildren who are getting into the act.

All of Europe used the train systems during the war for all kinds of purposes, and these railway systems didn’t have a choice to opt out. When these railways were used to transport troops to the front lines to fight and die, the Jews didn’t have a problem with that.  But today’s Jews act as if the railway systems knew that these Jews were being shipped to the gas chambers, and were therefore complicit in the dark plot.  No one in Europe knew what was going on in the camps except for the International Red Cross, which had access to the camps throughout the war, and they witnessed no mass killings, so why would society in general think anything out of the ordinary was happening?