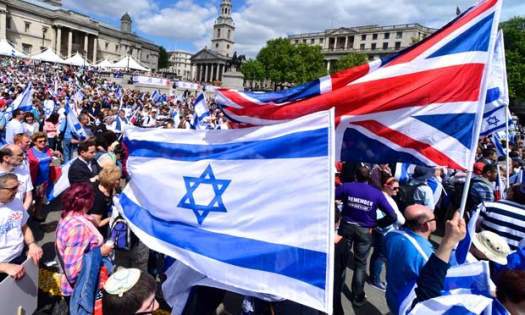 (Jewish Telegraphic Agency) A record number of Jews in England are taking advantage of an obscure legal loophole that allows them to have their German citizenship “restored” if they — or one of their ancestors — lived in Germany during WWII and had their citizenship revoked by the “Nazis”:

The applications, which increased following the 2016 referendum in the United Kingdom to leave the European Union, use a German legal provision that aims to make amends for Nazi-era persecutions, known as article 116-2.

Most of the applicants are Jewish, according to a report Friday by Deutche Welle, citing official data released by German authorities. Germany is a member of the European Union, which the United Kingdom intends to leave following the referendum.

Under article 116-2 of the German constitution, former Germans who lost their citizenship on “political, racial or religious grounds” between the day Adolf Hitler became chancellor on January 30, 1933 and Germany’s surrender on May 8, 1945, can ask to have their citizenship reinstated. The legal provision is also open to descendants of those who were persecuted and sought safe haven abroad.

According to the German government, the group “mainly includes German Jews” and members of critical political parties at the time.

Rabbi Julia Neuberger, a member of the British House of Lords and the senior rabbi at the West London Synagogue, explained why she was applying for a German passport in a 2016 essay, after the Brexit vote.

“It doesn’t make me any less British, but it does allow me to reclaim a bit of my history,” Neuberger, whose mother was a refugee from Germany, wrote in the Guardian. “It also declares a belief in Europe, an admiration for how Germany has dealt with its Nazi past, and a real belief that [German Chancellor Angela] Merkel’s welcome of migrants was both right and brave.”

Rabbi Neuberger is correct — this new loophole that she’s taking advantage of doesn’t make her less British — because as a Jew she’s not British at all.

She’s more closely related genetically to Jews in Germany — or Israel for that matter — than she is to any native British person.

“British Jews” don’t exist — rather, there are merely Jews who happen to live in England — as a “British Jew” is genetically the same as a “German Jew” or an “American Jew”.

And of course, the learned Rabbi Neuberger doesn’t want people to think that just because she now has three passports — British, German, and Israeli — that she’s somehow less loyal to her “home” country, England — the “disloyal Jew” is an “antisemitic canard” that has followed Jews everywhere they’ve dwelt.

However, no Jews would bother getting their German citizenship “restored” if there wasn’t some hidden advantage for doing so, and given the alleged rise of “antisemitism” in Germany, it is doubtful that these Jews actually want to move there any time soon.

It has always been a Utopian fantasy for Jews to be “citizens of the world” who can travel — or escape, if you will — from country to country without passports or even identification, just as anyone who engages in international crime naturally would.

And they are in the process of destroying all of our “fascist” national borders to make their Jewish dream come true.