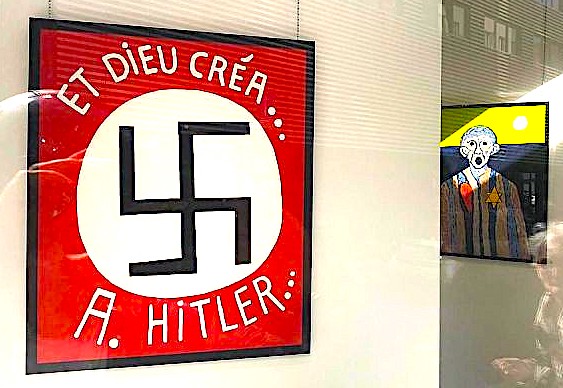 Today several Jewish news sites around the world were abuzz about an anti-fascist painting of a swastika on display in a Belgian art gallery:

A Hitler-themed swastika painting by a local politician that was recently put on display at a Brussels art gallery has sparked outcry in the Belgian Jewish community.

Fatmir Limani is an artist and the Socialist Party alderman in charge of cultural affairs in the Brussels-area municipality of Koekelberg.

His painting, titled “God created A. Hitler,” is scheduled to be featured until Sept. 30 in the prestigious Bog-Art gallery. The gallery is located 600 yards from the Jewish Museum of Belgium, where four people were killed in a 2014 terrorist attack allegedly perpetrated by an Islamist.

“It’s shocking,” Yohan Benizri, president of the CCOJB umbrella group representing French-speaking Belgian Jews, told the RTBF broadcaster Tuesday. “Seeing something like this on the streets of Belgium, it can be offensive. Seeing it in the context of rising anti-Semitism, it makes Belgium’s image seem even worse than it’s seen locally and international today.”

The artist, Benizri added, has a record of using shocking visuals and did not seem to attempt to single out Jews, but has nonetheless displayed “bad taste” with the swastika painting.

Limani defended is exhibition in remarks to RTBF, saying that the theme of his exhibition was the global rise of fascism and Nazism, and was not promoting either ideology.

“I am aware that my work is shocking, but I can not help but represent what shocked me in my life,” he told the broadcaster.

But Joel Rubinfeld, president of the Belgian League Against Anti-Semitism, or LBCA, told RTBF: “The passer-by seeing this on the street isn’t given the key to decipher the artist’s meaning.”

Right, so the Belgian “ADL” is worried that someone walking by the gallery will see the swastika hanging in a frame on the wall and think that it’s actually a headquarters for real Neo-Nazis who want to round up Jews and throw them in gas chambers.  These Jewish watchdog groups must think the goyim are so stupid that they can’t figure out what a swastika means without the help of the Jews to explain the “context” and its “intersectionality“.

In Belgium, one of the most liberal and politically-correct countries in Europe, people have been thrown in prison for merely questioning certain details of the official version of the so-called Holocaust, so the chances you’re going to see a swastika un-ironically hanging in a window at an art gallery are less than zero, and the Jews know this, which reveals this whole “controversy” to be completely cynical, a mere excuse to promote their global agenda to enact international laws to make any and all criticism of Jews illegal and punishable by imprisonment or more preferably death.

And to rationalize those laws, they have to create the appearance of constant and unremitting examples of daily “Jew hate” even if it’s a complete fabrication.