‘Jewxit’: A Glimmer Of Hope For England’s Future As 300,000 Jews Threaten To Leave 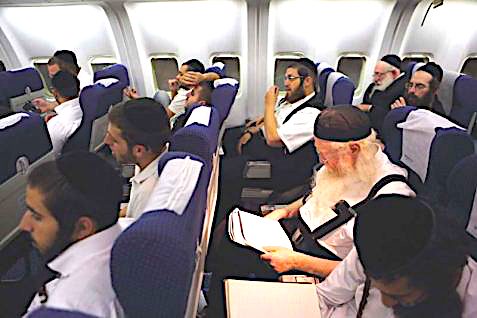 A 2018 Jewish Chronicle survey has revealed that one in three British Jews have considered leaving the UK due to rising antisemitism, while the ominous term “Jewxit” has recently sprouted, referring to a doomsday scenario where the entire 300,000-strong Jewish community flees the UK following a win by Jeremy Corbyn:

The Jerusalem Post has heard from British Jews whose concerns over Corbyn’s headline grabbing antisemitism are so grave, that they have considered emigrating should the UK Labour Party leader come to power.

The anxiety level within Jewish circles is such that several months back, former chairman of the Conservative Party Andrew Feldman had penned a sternly worded letter to Jeremy Corbyn saying, “I want you to know that many Jewish people in the United Kingdom are seriously contemplating their future here in the event of you becoming prime minister. This is because they can see that Labour, a party with a proud tradition of tolerance and inclusiveness, is now a hotbed of feelings against Israel and therefore the Jewish people. Quietly, discreetly and extremely reluctantly, they are making their contingency plans, and this would be a tragedy.”

This sentiment is echoed by Jonathan – not his real name – for whom the choice is clear.

“I have been worrying over Corbyn’s antisemitism for quite some time,” he told The Jerusalem Post. “Even with two children currently at school, my wife and I are confident that should Corbyn win, we are selling the house and moving to Israel.”

Jonathan’s angst is twofold: “There is the financial aspect, of course,” he explained, “as we expect the economy to decline under Corbyn, and for our house to instantly lose a tenth of its value, that is roughly 50 to 100,000 Pounds. That is just us, so I dread to imagine the impact on the UK economy if all 300,000 Jews left.”

To Jonathan, this is not as far-fetched a scenario as some might think. “Thousands of French Jews have uprooted themselves over the past few years due to antisemitism, and settled in Israel,” he explained, “so I can certainly see a wave of UK Jews fleeing the country in response to a Corbyn win. Such an exit would cause great damage to the UK’s economy. We are talking billions of Pounds worth of damage as people sell property and take their money elsewhere. Add to that the brain drain effect, and you get a sense of the huge potential loss.”

The second motivator for Jonathan and fellow would-be-leavers is the “negative atmosphere and zero prospect of any corrective action taken” within Labour.

“The intervention from the EHRC is equally welcoming and alarming,” explained Lily – not real name, “in that finally, antisemitism within the party is being taken seriously after Chakrabati’s whitewash, but [it is] alarming that the situation is so dire, it needs official investigation.”

These sentiments are echoed by Gil – not real name – who “will move to possibly Israel” because he “objects to living in a society that would actually consider electing an antisemite” into Downing Street. “What a horrific indictment on Britain that would be if we all leave, Britain’s reputation for tolerance and democracy will be tarnished for eternity.”

Well, there you have it, England.  The Jews are going to give you back your country, over which they have had an iron grip since the Rothschilds founded their Bank of England hundreds of years ago, and all you have to do apparently is overwhelmingly vote for the “antisemite” Jeremy Corbyn.  For the last 100 years, many observers have lamented that England was completely lost, as the British elite and aristocracy sold itself off to (and intermarried with) the wealthy jewish merchants and bankers.  How would England ever recover from this web of controlling debt and inter-mingling of their bloodlines?

Who knew it would be as simple as voting for a radical socialist like Jeremy Corbyn, whose public support for the Palestinians has so angered and “terrified” the Jews in the U.K. that they are willing to leave, perhaps to Israel, just to make a point and hopefully “tarnish” England’s international reputation as a senile lapdog for the interests of the Rothschilds?  But let’s not get our hopes up, too much.  Jews secretly need antisemites to make them, well, feel like real Jews by giving them yet another reason to be dissatisfied with a country which handed over the keys to the kingdom to them a long time ago.