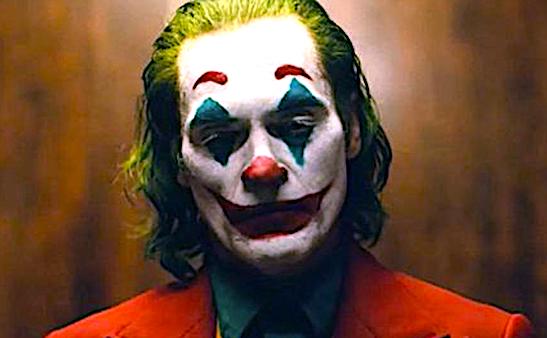 Jewish actor Joaquin Phoenix took on the role of a White man when he apologized for his ‘White privilege’ during his acceptance speech for winning his British “Oscar” at the British Academy of Film and Television Awards (BAFTA) at the Royal Albert Hall in London:

While most eyeballs were on the Super Bowl Sunday night, celebrities continued the trend of virtue signaling at Hollywood award shows, this time at the BAFTAS.

Racism was on the minds of a handful of celebrities at the award show, including ‘Joker’ star Joaquin Phoenix. The ceremony aired just days before the final Oscar voting ballots are due.

“We have to do the hard work to truly understand systemic racism,” Phoenix said while accepting his award for his work in last year’s hit ‘Joker,’ for which he is also up for a Best Actor Academy Award. “It is the obligation of the people that have created and perpetuated and benefit from a system of oppression to be the ones that dismantle it. That’s on us.”

“I’m ashamed to say that I’m part of the problem, because I’ve not ensured that the sets I’ve worked on are inclusive,” he added.

This came after host Graham Norton made plenty of jokes pointing out the lack of diversity in widely nominated films like ‘Joker,’ ‘Once Upon a Time in Hollywood’ and ‘The Irishman.’ Norton described ‘Joker’ as “essentially the story of white man who makes himself even whiter.” He called 2019 the year “white men finally broke through.”

…Comedian Ricky Gervais, who skewered celebrities who make political statements at award shows while hosting this year’s Golden Globes, sarcastically tweeted he was “very proud” of actors calling out the “lack of diversity” in their industry.

“Very proud of all these actors calling out the lack of diversity at award shows. I bet if they’d have known the nominations in advance, they wouldn’t have even turned up in the hope of winning themselves,” he said.

Joaquin Phoenix is a ‘halachic’ Jew because he has a jewish mother, and could claim Israeli citizenship anytime he wants it.

Yet he conveniently takes on the role of a ‘White’ man when he, like many of his fellow Jews, want to criticize and tear down the White societies in which they live.

Jews pretend to be White, then turn around and lecture Whites on how evil we are and how we should hand our countries over to people of color and transgender psychopaths because we owe it to them for some vague and marxist reasons.

Whether its slavery or blackface, Jews are more than happy to let real White people take the blame for it.

The Jews’ ability to “pass” as White has been the secret to their success in amassing such enormous financial, social, and political power in White countries, which is why they are so hesitant to renounce their bogus White identity and come clean about who the really are.

The term ‘white privilege’ is promoted by Jews to deflect their own jewish privilege and supremacy onto disenfranchised and marginalized White people.

And as more and more Jews intermarry, as Joaquin Phoenix’s parents did, it’s becoming harder and harder to identify racial Jews, which makes it even easier for them to pass as White.

But there’s a reason no one ever asks if there are too many Jews in Hollywood — because in that sense, Hollywood is already 99% diverse.