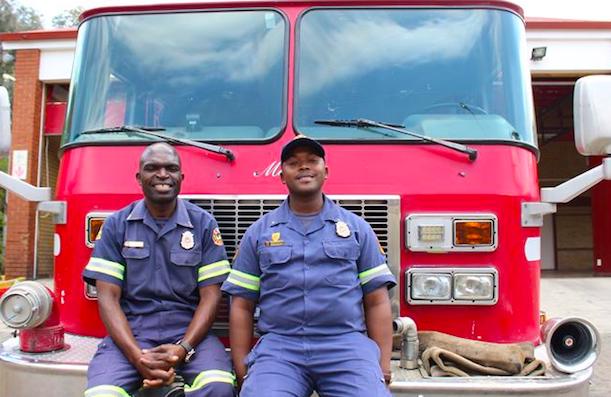 The [City of Johannesburg’s] Emergency Medical Services (EMS) spokesperson, Nana Radebe, confirmed to News24 that the municipality had 12 fire engines at the moment, but six of which have gone for repairs:

One Johannesburg resident was left fuming on Wednesday after his Linden house was gutted by a fire.

The City had to rely on a fire engine from Cosmo City, which is 20km away and one from Florida fire station that is 10km away, to battle the blaze.

According to Maggs Naidu, the Roosevelt Park fire station does not have a fire engine to assist nearby residents.

“It is a disgrace for the City. It is outrageous for a popular city to have six fire engines. People are dying because of its incompetence, people are being neglected by the City. Fortunately, no one died when the fire started in my house.”

…Radebe said the City relied on neighbouring municipalities, such as Ekurhuleni and Tshwane, to assist in fighting big fires.

“We are aware of the incident that happened on Wednesday. There are plans to acquire an extra 29 fire engines for the entire city. Some of the ones we have are old and constantly go for repairs. Last year, we acquired four engines to assist the eight we had, which are old and have been in use for the past 15 to 20 years.

“We have a crisis. We have removed all our fire engines from responding to medical calls. They are now dealing with fire incidents and motor vehicle accidents,” said Radebe.

She added there were glitches to secure a tender for more fire engines.

Johannesburg Mayor Herman Mashaba confirmed in a tweet that the City would be acquiring more fire engines.

Johannesburg has 4.4 million people and 6 working fire engines.  To put this in perspective, the City of Chicago has 2.7 million people and 96 working fire engines.  No doubt during “evil” Apartheid there was a far better equipped fire department, but at least now because of equitable hiring, they have a lot more Black firefighters, even though they don’t have any trucks to get them to the fires when they break out.  They obviously have their priorities straight.

And when they say they have “plans” to get 29 new engines for the city, what that actually means is that 10 years from now they will still “have plans” to get those new engines.  But even if they did get new engines, they need skilled mechanics and technicians to keep them working, and obviously if they can’t keep the 12 they do have working, how are they going to keep another 29 in operation?  Yes, these are “racist” questions, but the entire country is one big racial question mark.