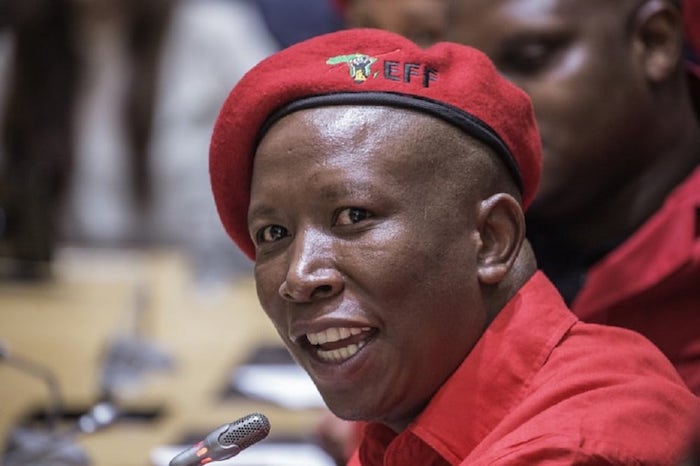 The head of South Africa’s Economic Freedom Fighters (EFF) Party, Julius Malema continues to make incendiary statements to taunt and threaten White people, most recently claiming that White people actually want to give their land up to Blacks peacefully:

The leader of South Africa’s radical opposition EFF party has vowed that his supporters will increasingly seize unoccupied land to put pressure on the government to redistribute land to black people.

Julius Malema, head of the anti-capitalist Economic Freedom Fighters party, warned that poor, young South Africans felt abandoned by the country’s post-apartheid politics since the end of white-minority rule in 1994.

Land reform has become the country’s fiercest battleground ahead of elections next year when President Cyril Ramaphosa will try to revive fading support for the ruling ANC party.

“It’s a completely new generation running out of patience,” Malema told AFP in an interview at the downtown Johannesburg headquarters of the EFF, which he founded in 2013 after being ejected from the ANC.

“The EFF came at the right time because it was able to amass all this energy into a party to agitate for economic struggle,” he said.

Malema, 37, is renowned for his fiery speeches and attacks on whites as he builds a growing support base among South Africa’s poor….

…“The EFF is the only relevant party in South Africa today — we are the most influential political party through ideas.”

…Malema said he had led land seizures near his home in the northeastern city of Polokwane, with more than 3,000 families settled on unused land whose owner lives in Canada.

“He came back and wanted to start negotiating,” Malema said, predicting land seizures in South Africa would not be violent — unlike in neighbouring Zimbabwe where brutal farm invasions wrecked the economy under Robert Mugabe.

“There won’t be violence. I think (white farmers) want to give up land as both black and white are talking to each other about how we can resolve the land issue.

“We are going to share the land, but it must first be owned by the state and reallocated back to all of us — black and white.”

So the problem in Rhodesia was that White farmers didn’t want to give up their land, so it became violent.  But the Whites in South Africa are different–they want to give their land to Blacks, so the process will be peaceful, at least in Malema’s communist fantasy world.

One important factor that Malema is not mentioning is the motivation of revenge underlying all his rhetoric.

And what about the thousands of Whites who have already been tortured and murdered by Blacks in South Africa?  No doubt, the last thing out of their mouths before they were viciously killed by Blacks was, “Take whatever you want, just don’t hurt me or my wife.”

No, the Blacks don’t really want the land–they want payback for alleged and imagined “wrongs” done to them, and that payback can be satiated–at least temporarily–only by uncontrolled violence–and Malema is doing his best to stoke this resentment in his poor Black followers.