Why Did All Of Joe Biden’s Children Marry Jews? 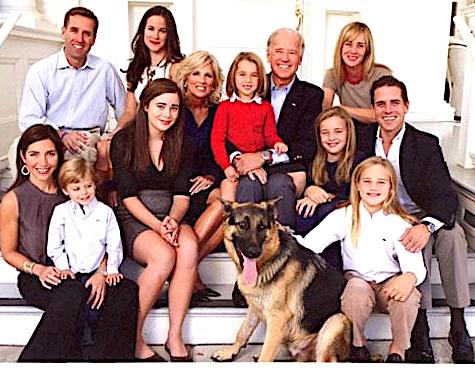 Joe Biden has something very unusual in common with Donald Trump –their children have married Jews — a family trait that seems to be a tacit requirement these days for anyone running for the highest office in American politics:

Hunter Biden and his wife shared their dramatic love story — and it includes matching Hebrew tattoos.

Biden, the son of former Vice President Joe Biden, told ABC that he married his now-wife Melissa Cohen Biden within six days of meeting her.

Within days of meeting his Jewish wife, Biden got a tattoo with the word “shalom,” which means “peace” in Hebrew, to match one that she had. The pair wed in May.

Melissa Cohen Biden, 33, is a filmmaker from South Africa but is now a naturalized U.S. citizen.

In the interview, Biden also spoke about his struggles with addiction and how he has sought treatment.

Hunter Biden isn’t the first in his family to marry a Jew. His late brother, Beau, married Hallie Olivere, who is Jewish. Following Beau’s death from brain cancer, Hunter and Hallie had a romantic relationship. Hunter’s sister Ashley is married to Howard Krein, a Jewish doctor.

Jews have an innate attraction to power and wealth, and going back through recent history, Jews often found themselves in the inner-most circles of European aristocracy because of their willingness to extend loans to the cash-strapped profligate elite at interest.

And one of the easiest ways to get those un-repayable loans forgiven was to marry the daughter of the jewish money lenders, a simple strategy that allowed Jews to infiltrate and ultimately replace the native aristocracies of Europe.

The children of Biden, Clinton and Gore have all married Jews, a phenomenon that can hardly be a coincidence.  It has become quite fashionable to have a jewish spouse yourself or marry your children off to Jews if you’re running for office.  What better way to convey to wealthy jewish voters that you are 100% kosher?

And just like communism, intermarriage is one of the easiest ways to ensure that all the wealth of the goyim ultimately ends up in the coffers of the Jews.