“We call on governments around the world to ensure full and unimpeded access to all sexual and reproductive health services for all women and girls,” says the statement released May 6 by Global Affairs Canada.

The Trudeau government is well known for aggressively promoting abortion on the international stage, pledging $7.1 billion by 2030 to fund and promote abortion as part of its international aid, and describing global abortion access and “sexual reproductive rights” as “at the core” of its foreign policy.

The Global Affairs Canada “Statement on protecting Sexual and Reproductive Health and Rights and Promoting Gender-Responsiveness in the COVID-19 Crisis” was issued by the ministers of 37 countries on behalf of the “peoples and governments of 58 nations.”

Responding to the “unprecedented threat” of the coronavirus pandemic — which originated in Wuhan, China — “requires solidarity and cooperation among all governments, scientists, civil society actors and the private sector,” it noted.

“Funding sexual and reproductive health and rights should remain a priority to avoid a rise in maternal and newborn mortality, increased unmet need for contraception, and an increased number of unsafe abortions and sexually transmitted infections,” it stated.

“Sexual and reproductive health needs, including psychosocial support services, and protection from gender-based violence, must be prioritized to ensure continuity,” it reiterated at another point.

The signatory countries also support “multilateral” efforts by international bodies such as the UN and the WHO, and “welcome UN General Assembly resolution entitled ‘Global Solidarity to fight COVID-19.’”

Yes, promoting abortion is surely an effective way of fighting COVID-19 — after all, an aborted child has no chance of contracting the virus in the first place.

And it’s hard to argue that if you abort a child prior to birth, that child certainly is far less likely to die after being born.

And no one challenges Trudeau on the utter ridiculousness of his policies — instead of tar and feathering him and running him out of town on a rail, Canadians re-elected him — allegedly.

Canada has an obligation to every woman and unborn child to make sure they have uninterrupted access to free abortions even during pandemic lockdowns.

No child should lose his or her right to be aborted prior to birth to avoid dying unnecessarily.

And when we see all these elderly people allegedly dying of the coronavirus, it’s a sobering thought that they could have been spared those painful deaths if their mothers had simply aborted them in the first place.

Abortion is far more effective than any vaccine could ever hope to be in protecting children from the coronavirus. 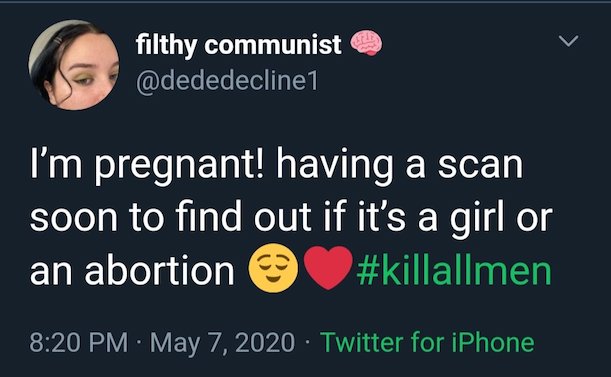