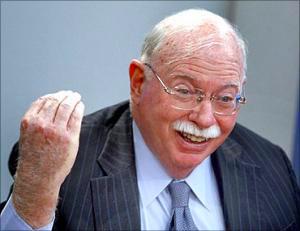 Michael Steinhardt, a prominent New York philanthropist considered a titan in the Jewish community, has been accused of sexual harassment by six different women:

Michael Steinhardt, 78, has been accused of asking women for sex, making inappropriate remarks about their bodies and fertility and offering them millions of dollars to let him set them up with other men in a series of scathing interviews published by The New York Times on Thursday.

Steinhardt, who is married with adult children, allegedly asked some women for threesomes and repeatedly asked them to sleep with him while they were courting him for donations.

He is also accused of berating the women if they were unmarried and suggesting that a young rabbi become his live-in mistress when she was 27 and he was in his fifties.

The billionaire, who made his fortune through hedge funds in the 1960s, has an ‘obsession’ with matchmaking in the Jewish community, friends say, and has given millions of dollars to Jewish nonprofits over the last several decades.

According to insiders, he is known to push single Jews into ‘kissing, dating or marrying’.

He also pushes Jewish women into having children by offering them money or the use of a Caribbean home for them to conceive children in.

All of the women who have shared stories about him either came into contact with him through work or when trying to get a donation from him. They say they felt they had to tolerate his behavior or risk losing their careers.

Sheila Katz, the vice president of Hillel International, a campus organization for Jewish college students says he asked her to have sex with him and called himself the ‘king of Israel’.

She had gone to his Manhattan office in 2015 to film an interview for a campaign when he started making inappropriate remarks.

Katz said that after asking her to have sex with him, he brought in two male employees and told her he would give her $1million to marry one of them.

He added that it was an ‘abomination’ that she was not married and said he would not fund any of her projects until she was married with a baby.

She complained about him to her boss at Hillel and was promised she would not have to see him again.

… After the news broke on Thursday, female rabbis spoke out to describe the allegations as the ‘worst kept secret’ in the Jewish community.

In a statement, Steinhardt said: ‘In my nearly 80 years on earth I have never tried to touch any woman or man inappropriately.

As is typical of many jewish “philanthropists”, Steinhardt’s fortune can be traced back to his family connections to organized crime.  His father, Sol Steinhardt was a degenerate gambler and jewelry fence who, despite being “close friends” with jewish uber criminal, Meyer Lansky, served ten years in prison for dealing in stolen property.  And despite having a convicted felon with organized crime ties, young Michael Steinhardt somehow managed to gain admission to America’s most prestigious business school, Wharton at the University of Pennsylvania.

And when Steinhardt started managing hedge funds, he would receive envelopes stuffed with cash from his mobster father, an arrangement that became the operating capital for this future financial empire.  And just like many rich and powerful Jews, Steinhardt used his position of “White privilege” to allegedly sexually harass women who approached him for “philanthropic” donations to jewish causes.  No doubt, as Steinhardt himself has claimed, this is probably all just a big misunderstanding of his jewish style of doing business, kind of the way “philanthropist” Robert Kraft also does business with Asian prostitutes.