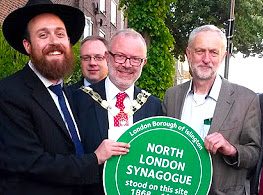 Jeremy Corbyn, who has been relentlessly smeared by the jewish-controlled press as a Jew-hating antisemite, admitted years ago that he has jewish ancestors:

Jeremy Corbyn has revealed he may have distant Jewish roots in his family.

The new Labour leader told the Church Times on 18 September, that although his immediate family had a Christian background, he has a ‘Jewish element’ in his background.

He said “there is a Jewish element in the family, probably from Germany,” despite saying his mother “was a Bible-reading atheist”.. “brought up in a religious environment, and her brother was a vicar”.

He added, “my father was a Christian, and attended church; and the school that I went to was religious — we had hymns and prayers every morning.”

Speaking more generally about faith, he said in the interview: “I’m not anti-religious at all. I probably go to more religious services than most people who are very strong believers.

“I think the faith community offers and does a great deal for people.”

Jeremy Corbyn caused concern in the Jewish community during the leadership campaign, over connections with extremists and anti-Semites.

Following his election however, both the Jewish Leadership Council and Board of Deputies said they were ready to meet him.

Corbyn appointed a Jewish MP, Luciana Berger, to his shadow cabinet, and has also agreed to meet former Northern Ireland secretary Ivan Lewis MP to discuss the issue of anti-Semitism on the left.

Notice how this article tip toes around the issue, suggesting that jewish identity is a religious choice rather than a racial reality.  Jeremy Corbyn can choose whether or not he wears a yarmulke or attends synagogue, but he does not have the choice to be ethnically jewish or not.  The ersatz State of Israel recognizes people as Jews if they have just one jewish grandparent, whereas many rabbis claim that the mother must be jewish for the children to be jewish, meaning the definition of a Jew is completely dependent on circumstances.

If Corbyn has any jewish ancestors, he is jewish by race.  Every Jew has White ancestors which is why they can pass so easily as White, but despite all that White DNA, they still claim to be jewish, even if they are not in any way religious Jews.  Perhaps it’s time for Jews like Jeremy Corbyn to stop resisting his jewish legacy and embrace his inner Jew.  His politics are certainly radical enough to please most Jews, but he clearly needs to work on showing less sympathy for the Palestinians, a sympathy which has earned him the label “antisemite”.