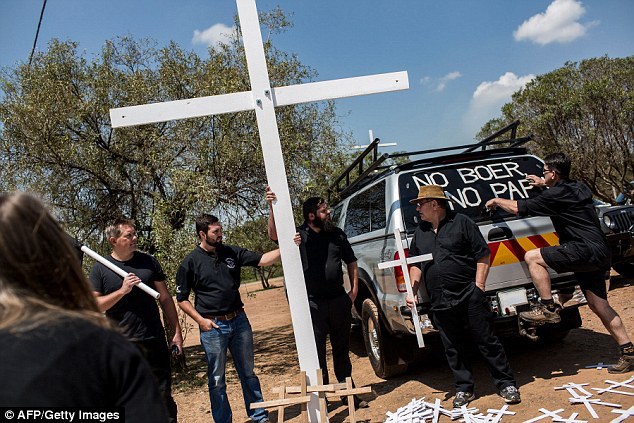 Confiscation of White farms has begun in South Africa as Black thieves, masquerading as government officials, have been offering White farmers in South Africa literally pennies on the dollar for their valuable farm land, which the Whites have refused:

South African authorities have reportedly started seizing white-owned land after negotiations on buying out the properties stalled. The first seizures are targeting game farms in the Northern province of Limpopo.

The government had tried to buy the lands owned by Akkerland Boerdery Ventures for one-tenth of the land’s value, reports City Press, a Johannesburg-based news outlet. The company, which has been running a 3200 hectare (32 square kilometers) game farm, reportedly asked for 200 million rand ($18.7 million) for the land while the government was ready to offer them just 20 million rand.

“Notice is hereby given that a terrain inspection will be held on the farms on April 5, 2018 at 10 a.m. in order to conduct an audit of the assets and a handover of the farm’s keys to the state,” reads the letter received by Akkerland Boerdery earlier this year.

The land owners immediately tried to get an injunction to prevent expropriation until a court had ruled on the issue. However, the Department of Rural Development and Land Affairs reportedly refused the application.

“What makes the Akkerland case unique is that they apparently were not given the opportunity to first dispute the claim in court, as the law requires,” spokeswoman for the agricultural industry association AgriSA told the media.

So far, the ruling African National Congress (ANC) hasn’t revealed details of the farms being targeted and has attempted to calm investor fears. The proposed seizures were “tied to addressing the injustices of the past,” according to the ANC.

“Over time I think the markets as well as investors will appreciate that what we are doing is creating policy certainty and creating the conditions for future investment,” the ANC spokesman said as quoted by the media.

South Africa is currently undergoing controversial land reform, proposed by the ANC led by the President Cyril Ramaphosa. The measure that involves taking land away from white farmers and distributing it to black citizens of the country, has sparked an international outrage with experts expecting the investment climate as well as the agricultural industry to suffer.

“You shouldn’t own more than 25,000 acres of land. Therefore if you own more, it should be taken without compensation,” ANC chairman Gwede Mantashe said last week, sparking a panic among the farming community.

This government-sanctioned billion dollar land theft will not “redistribute the wealth” as the Blacks claim.  It will merely redistribute Black poverty, crime, and hopelessness.  Nor will it address “past injustices,” because Apartheid was not an injustice done to Blacks, but a necessary measure to protect them from themselves and their own destructive natures.

Blacks have notorious short attention spans and very little patience, and these slow legal processes with Whites will soon break down as the Blacks cast aside all pretense of legality and literally engage in outright mayhem and violence to get what they think they have coming.  The concept of “due process” is not in the nature of Black Africans, and anyone who expects them to respect that idea ignores all history in Africa.