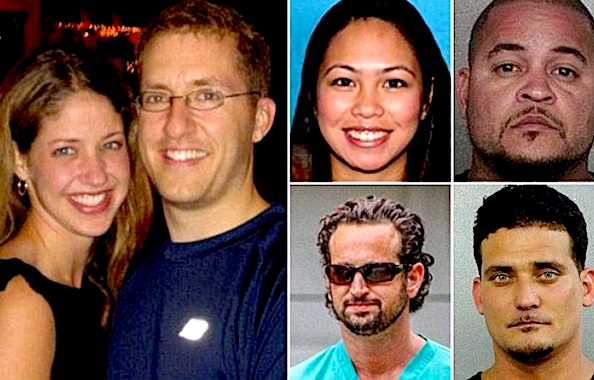 A  jury in Tallahassee, Florida, has found a latino man guilty in the murder of Dan Markel, a Jewish law professor shot outside his home in 2014, but inexplicably Markel’s ex-wife and her brother who allegedly hired the murderer were not even charged:

The jury on Friday found Sigfredo Garcia, 37, guilty of first-degree murder and conspiracy to commit murder, the New York Times reported. Sentencing begins on Monday. Garcia faces the death penalty in the case.

The same jury was unable to reach a verdict on the same charges against Katherine Magbanua, 35, leading the judge to declare a mistrial.

A third person charged in the murder, Luis Rivera, a close friend of Garcia and a former leader of the North Miami Latin Kings gang, cooperated with law enforcement. Under a plea deal, Rivera testified against Garcia and Magbanua, receiving a 19-year sentence and avoiding the death penalty.

Markel was a popular 41-year-old professor at Florida State University at the time of his death. He was a well-known criminal law scholar who had helped build a network of online legal scholarship.

He and his wife Wendi Adelson divorced in 2013 and received joint custody of their sons. At the time of Markel’s death, Adelson had asked for and been denied permission to move with the boys to South Florida.

Adelson’s brother and mother then arranged the murder for hire of Merkel for $100,000, prosecutors said. None of the Adelsons has been charged in the case.

It would be an understatement to suggest that Jews have enormous power and influence in the state of Florida, but if you suggest such a thing, you’ll be smeared as an antisemite, but the Jews themselves are proud of their power, and they freely and openly use it to their own benefit.  Again, this is the real “white privilege” that the liberal media is going on and on about.

We don’t know that these murder-for-hire Adelsons are related to Donald Trump’s biggest financial backer, Sheldon Adelson, but then again, but the fact that they are Jewish is explanation enough as to why they were not charged even though the District Attorney obviously knows they hired these gang members to kill Markel.

And no doubt, this kind of blatant Jewish privilege has nothing to do with the rise in “antisemitism” in America and worldwide.