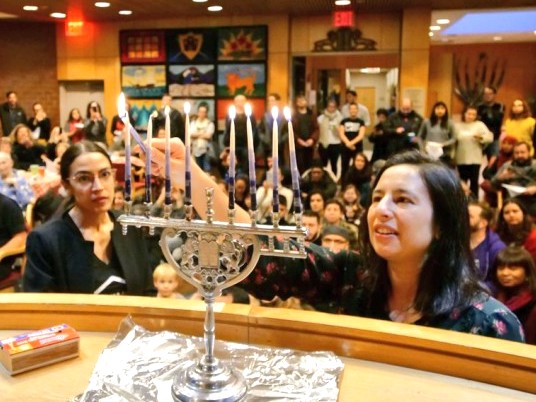 As if her short tenure as a member of the U.S. Congress could get any more bizarre, Alexandria Ocasio-Cortez told a stunned crowd at a Hanukkah ceremony in New York City that her family is jewish:

In a speech at an event celebrating the eighth and final night of Hanukkah, Alexandria Ocasio-Cortez, one of 435 members of the incoming US House of Representative, shared that members of her family were Sephardic Jews who were forced to flee to Puerto Rico during the Spanish Inquisition.

Ocasio-Cortez shared her family’s past at a Hannukah celebration she held together with the Jews for Racial and Economic Justice (JREJ) earlier this evening, and thanked the organization on her social media account for assembling the ‘festivities.’

“So many of our destinies are tied beyond our understanding.” Ocasio-Cortez said regarding her family lineage.

The newly elected congresswoman of New York told a gasping crowd, “That a very long time ago, generations and generations ago, my family consisted of Sephardic Jews.”

Ocasio-Cortez told the audience of her family’s past struggles as Sephardic Jews, how they were forced to flee into the mountains of Puerto Rico during the Spanish Inquisition and practice Catholicism as a front to escape antisemitic oppression.

It’s odd that she waited this long to reveal that she’s a Jew, especially coming from New York City where being a Jew opens a lot of otherwise closed doors.  Did it just slip her mind like it did with Madeleine Albright, or is she just making the whole thing up to deflect criticism away from ruinous policy proposals?  After all, now that she’s identified herself as a Jew, she can smear all her critics and detractors as “antisemites”, and every Jew knows just how powerful that arrow is to have in your quiver.

No doubt, there will be an army of Jews working feverishly over the next few weeks looking into Ocasio-Cortez’s alleged jewish ancestry, but the main story line will be that even though she’s part jewish descent, she’s not a Jew.  The reality is that if someone has any jewish ancestry anywhere in their family history, they are jewish.  There is no such thing as a “pure-blooded” Jew as they are all mixed-race, regardless of what the rabbis contend.  Chances are, most latinos in America can make the same claim as Ocasio-Cortez simply because so many of the “Spanish” who settled in Central America were actually conversos or crypto Jews.