Legal Loophole Makes It Impossible to Arrest and Deport Caravan Migrants from U.S. 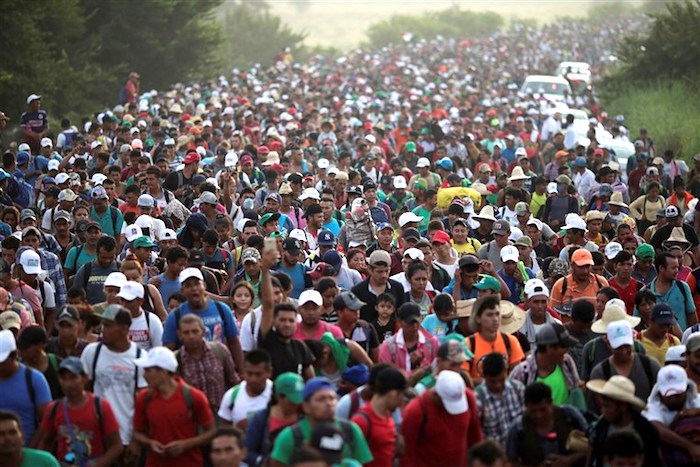 Unbeknownst to most Americans, the Flores settlement agreement and Trafficking Victims Protection Reauthorization Act mandates that both families and unaccompanied minors from countries other than Mexico and Canada cannot be turned away or arrested by the U.S. Border Patrol:

Border Patrol agents are apprehending an increasing number of migrant groups that include more than 100 people on the northern side of the U.S.-Mexico border, and recorded two more incidents this week.

The total number of people found in large caravans wandering through southern Arizona in recent weeks now stands at 1,200, according to U.S. Customs and Border Protection.

Agents based at Ajo Station in south-central Arizona found a group of 164 people and another that included about 100 people in the desert just north of Mexican city Sonoyta Tuesday afternoon, a press release issued Thursday stated.

Every person in the group was taken in by federal law enforcement agents and determined to be from three Central American countries: El Salvador, Guatemala, and Honduras. The caravan members were between the ages of 11 months and 59 years.

Human smugglers flooded a portion of the Texas-Mexico border with 170 Central American families and children last week in an attempt to overwhelm U.S. Border Patrol and get adults who wanted to avoid getting arrested into the country while agents were busy elsewhere, CBP said in a statement.

Officials say the use of these 100- and 200-person groups has become the newest way smugglers are illegally moving people into the country.

A Border Patrol official based on the southwest border who asked to remain anonymous told the Washington Examiner last week the recent caravan trend is “concerning” because the agency does not see it discontinuing any time soon.

The official does not believe these massive groups were traveling together through Mexico, unlike the 1,000-person caravan of Central Americans that did so this spring. Instead, much smaller groups of migrants have traveled to Mexican border towns, and once there, smugglers formed a large group, then led them into the U.S. where they surrendered to federal law enforcement officers.

This week, DHS reported 98 to 99 percent of the nearly 95,000 Central American “family units” apprehended in fiscal 2017 remain in the country today.

“Smugglers and traffickers know our loopholes well. The lack of legal tools creates pull factors that invite families to cross the border, because they know upon apprehension we will be required by courts to release them into the interior of our country,” DHS spokeswoman Katie Waldman said in a statement to the Washington Examiner.

The Flores settlement agreement and Trafficking Victims Protection Reauthorization Act mandate both families and unaccompanied minors from countries other than Mexico and Canada cannot be turned away or arrested.

The continued surge also poses a problem for border stations, which lack the capacity to hold more than a few dozen illegal immigrants at once while they are processed.

Because of intentionally subversive legislation like this, even if Trump’s Wall were built, it could not stop non-Mexicans from legally entering our country and claiming “asylum”.  This treachery could be stopped very quickly if America put pressure on Mexico to stop these Central Americans from entering and traveling through Mexico, but no U.S. politician, including Trump, is mentioning that strategy, because they don’t want the public to know how easily this problem could be solved.  Mexico is aiding and abetting these criminals, and the U.S. has every right to use whatever force is necessary against Mexico to stem this flood of invaders.

The ideal end game of the nation wreckers is to absolutely overwhelm the border security and immigration officials with “legal” asylum seekers to the point where the only “solution” is a pre-planned borderless North American Union similar to the EU.  Those who voted on this treacherous immigration legislation should be arrested for treason against the U.S., but these days it’s become virtually impossible to commit treason as the United States is right in the cross hairs of these political termites.