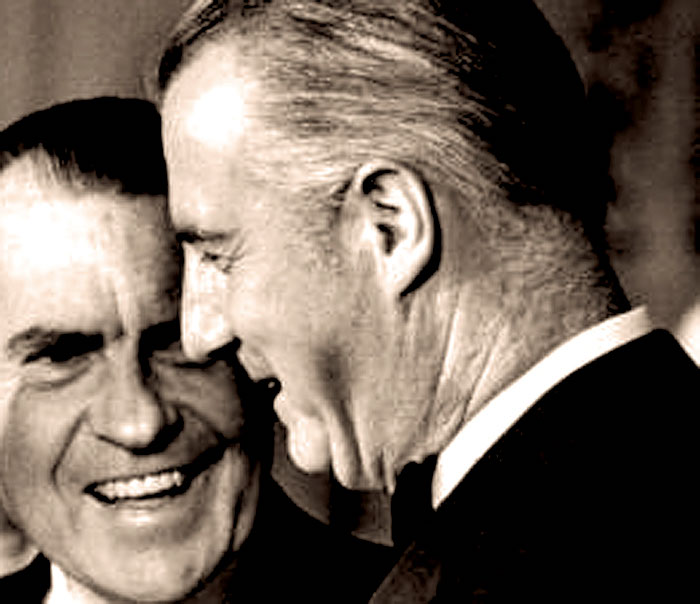 The official explanation of why Spiro Agnew was forced to resign as Vice President has always been because of corruption charges while he was governor of Maryland, but a letter has emerged in which he claims he was “framed” by Zionists who correctly believed that he wasn’t pro-Israel enough:

The late US Vice President Spiro Agnew requested money in 1980 from Saudi Arabia to “continue to fight” against American Zionists.

Agnew, who served for three years under Richard Nixon before resigning in 1973 in a corruption scandal from his time as the governor of Maryland in the 1960s, wrote to Fahd bin Abdulaziz Al Saud, then crown prince of Saudi Arabia, saying “I need desperately your financial support,” MSNBC reported Thursday.

“You highness is already familiar with the unrelenting Zionist efforts to destroy me,” Agnew wrote, adding that Elliot Richardson, who was attorney general when Agnew was vice president, “attacked” him because Agnew “could not be trusted to act properly in the Middle East.”

The reason, he also wrote, “was that the Zionists in the United States knew that I would never agree to the continuance of the unfair and disastrous favoring of Israel and they had to get me out of office there so that I would not succeed Nixon.”

Since 1974, “The Zionists have orchestrated a well-organized attack on me” through lawsuits, Agnew said, “to bleed me of my resources to continue my effort to inform the American people of their control of the media and other influential sectors of American society.”

Agnew, who died in 1996, resigned amid revelations that he had engaged in corruption while governor and did not contest his conviction. But in his letter to the prince, he said the Zionists “framed” him.

He spoke out frequently about what he called the “Zionist influences in the US.”

The jewish hatred of Richard Nixon and Spiro Agnew is well known in the back alleys of Washington, D.C. politics.  Nixon was driven out of office not because he lied about the Watergate break in — that’s the jewish Hollywood version of Nixon.  In reality, Nixon’s undoing began when he opposed the Jews, especially when it came to a peace settlement involving Israel and the Palestinians.  He didn’t trust his jewish Secretary of State, Henry Kissinger, so he secretly went around him and tried to broker a peace deal using the Saudis as a back door channel.

That fact alone accounts for why Spiro Agnew would have felt he could appeal to the Saudis to help him in his fight against the jewish Zionists who orchestrated his downfall.  Of course, what neither Nixon nor Agnew realized was that the House of Saud were cryto-Jews who were — and continue to be to this day — ardent Zionists behind the scenes.  The very fact that Agnew’s letter to the Saudis is now in the hands of the jewish press for the purposes of discrediting him, suggests an understanding between them.