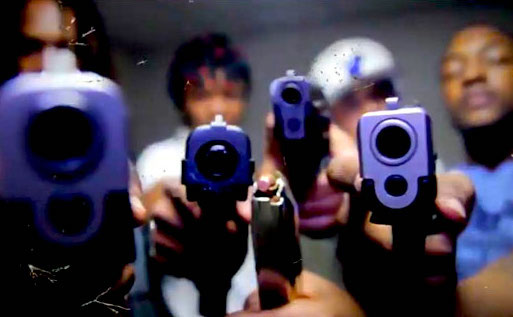 Despite the undeniable fact that the vast majority of mass shootings and gun-related crimes are committed by Blacks and Latinos in America, liberal “law makers” have been caught running interference for them by attempting to exempt them from ‘Red Flag’ laws:

Democrats advanced a new measure this week to encourage states to pass “red flag” laws. These so-called extreme risk protection orders authorize removing guns and ammunition from individuals deemed as dangerous by some anonymous, unaccountable person, but it would not include the ready-made lists of gang members.

Republicans tried to add an amendment including known gang members, but the Democrats will not permit the inclusion of gang databases. It’s odd since gangs are the ones causing most of the so-called gun violence.

They would agree to include the names of white supremacists, but not other ‘terror’ groups.

The House Judiciary rejected any effort by Republicans to include gang databases since they are worried about people mistakenly taken for a gang member. They brought up the ‘no-fly, no-buy’ list which was filled with inaccuracies, but Rep. Ken Buck, a Colorado Republican, who hoped to amend the measure to include gang databases, reminded the Democrats the restrictions for placing someone on a gang database are much tougher than the no-fly list.

“This is a situation where the police officers are trained, and there are very identifiable signs, and it isn’t just one sign,” Buck told Chair Jerrold Nadler.

Democratic Rep. Eric Swalwell, of California, offered to support the amendment if Buck agreed to include those listed “individuals affiliated with white nationalism.”

Buck agreed, but said the language should include “any type of supremacy.”

Democrats were uninterested and the amendment ultimately failed.

Rep. Doug Collins of Georgia called out Democrats for their hypocrisy, reminding the committee of a ‘sit-in’ on the House floor during which the GOP majority in 2016 could not conduct business until they passed, ‘no-fly, no-buy” to prevent people on the no-fly list from purchasing guns.

“It’s amazing to me,” Collins said. “We had a large blow-up on the floor of this House just a couple years ago about the No-Fly, No-Buy list, which was shown to have issues, but at that point, nobody from the other side brought this as a concern, and now we are bringing it as a concern,” Collins said.

Violence in America does indeed have a color, but it’s by and large not White; it’s every shade of brown, and every elected official in America, including the Brown ones, know this but will never admit it.  The Mayor of New York City has openly admitted that mass shootings by Black and Latinos “don’t count” as mass shootings.

If ‘Red Flag’ laws were applied to Blacks and Latinos, just using social media alone, the police could probably reduce gun violence in America by over 75% by legally confiscating virtually every weapon possessed by Blacks and Latinos in America’s cities.

But the reality is these “law makers” have no interest is actually reducing gun violence in America; that’s not at all what their proposed gun laws are about.  They want to take legal guns away from law-abiding non-violent White Americans who are standing in their way from ushering in their totalitarian multi-racial Animal Farm where everyone will finally be equal, but some “pigs” will be more equal than others.