Like COVID, ‘Asymptomatic’ Antisemitism Can Go Undetected And Silently Spread If Not Aggressively ‘Treated’ 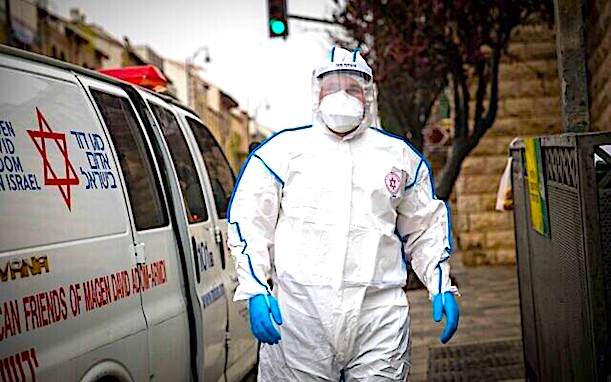 Top “experts” are now comparing certain “silent” forms of antisemitism to the COVID virus — and insist that society needs to implement the same aggressive and draconian worldwide measures to stamp it out once and for all:

In my darker moments, I sometimes wonder if we’ll ever rid the world of antisemitism. It’s been around for centuries, changing its form and potency at different times and places, but always somehow present. Even when fairly dormant, we know deep down that it could be awoken at any time, so we constantly take precautions.

Data gathered by JPR for the EU show that 60 per cent of British Jews avoid wearing, carrying or displaying items that might identify them as Jewish, at least on occasion. In France, the equivalent proportion is 82 per cent.

Antisemitism is often likened to a virus that mutates and creates new variants, changing form and potency over time and across space. It drew on Christian theological ideas in medieval Christendom, and on pseudoscientific findings in late nineteenth and early twentieth century Europe.

Today, it takes root in the world of fundamental rights, where the cardinal sins are ethnic cleansing and apartheid, both charges levelled periodically at Israel and too often, by association, Jews.

And just like a virus, it infects different people to different extents. One of the ways in which it is commonly researched is by presenting survey respondents with a set of antisemitic statements and asking them whether they agree with them or not. “Jews get rich at the expense of others.” Agree or disagree? “The Holocaust is a myth.” Agree or disagree?

So there are relatively few hard-core antisemites, as in people who incontrovertibly test positive for the virus of antisemitism who potentially pose a mortal threat to Jews.

But at the same time, there are many who could be called asymptomatic antisemites — people whose prejudice is almost undetectable unless carefully tested, but who can nevertheless serve as vectors for infecting others.

The virus metaphor is helpful today. We have learned much recently about how to tackle a pandemic. We’ve seen public information campaigns to raise awareness of the threat. We’ve seen preventative measures — steps everyone needs to take to help reduce the risks to themselves and others. We’ve seen punitive measures for those breaking the rules. We’ve seen research — constant measuring of the scale of the problem and early warning signs when it is about to escalate. And we’ve seen massive investment in antidotes, a global effort to create vaccines.

Tackling the virus of antisemitism, which has many variants and mutates over time, requires a similar approach. Public education. Preventative measures. Punitive action. Statistical monitoring and analysis. Investment in serious antidotes.

In brief, a multiplicity of initiatives, brought together under an overarching mission of combating antisemitism, that recognises the complexity of the phenomenon it seeks to address.

And not just here in the UK, but everywhere that antisemitism rears its ugly head.

It’s a daunting task that, as I said, may never be fully achievable. But I was given cause for optimism recently when I presented evidence at a United Nations conference about the issue.

I know, I know — the UN. Not exactly an organisation with a great reputation among Jews. But this felt different. Convened by former Spanish Minister of Foreign Affairs, Miguel Moratinos, a well-known friend of Israel and the Jewish People, and involving the heads of multiple Jewish and general international agencies, it marked the start of what looks like a serious and concerted attempt to build that multifaceted, global strategy. If that approach can work with the coronavirus, maybe, just maybe, it can work with antisemitism too.

As long as Jews completely reject the idea that their own behavior has anything to do with the creation of antisemitism, they have no choice but to resort to iron-fisted censorship and draconian deterrents like prison — or even death sentences.

It is, though, rather ironic that this Jewish writer chose to compare antisemitism to a virus — considering that Jews themselves have often been compared to infectious or invasive agents such as viruses, bacteria, cancer — and even termites.

So apparently that’s one thing everyone can agree on — both Jews and antisemitism are like “viruses” — and perhaps that’s a start for some common ground that can get this discussion going in a positive direction.

We know that pretty much everything Jews do to “combat” antisemitism ends up causing more antisemitism — so it would seem that if Jews want to help reduce antisemitism perhaps they should try just ignoring most instances of it that don’t involve actual physical violence.

But a large U.S. government study has shown that online antisemitism does not cause physical violence toward Jews in real life.

So it would seem that perhaps the best way to handle antisemitism is to do nothing at all — instead, Jews should just ignore it and go about their normal business of trying to subvert healthy White nations — and ultimately ruling the world.

Why let a little inevitable antisemitism along the way spoil all the fun?