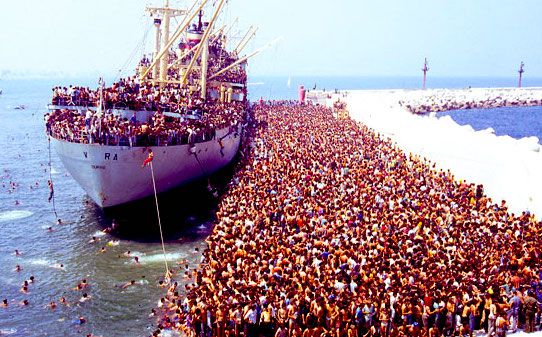 Margaritis Schinas, the Spokesman of the European Commission whose responsibility it is to protect the ‘European way of life,’ which includes limiting migration, defended his mandate in front of harsh criticism from Lefist MEPs:

Left-wing parliamentary groups are calling upon the future president of the European Commission Ursula von der Leyen to abandon the title of this portfolio linking migration and the “protection of the European way of life.”

The new European executive must start work on November following a series of hearings with the 26 commissioners and a vote in Parliament.

During his hearing, Schinas was questioned by MEP Sophie in’t Veld about the “toxic name”, “seen as a victory by the extreme right.” She demanded Schinas recognise the choice was a “mistake.”

“Between respect for all the arguments expressed on the one hand and (the) determination of (Mme von der Leyen) to listen and seek consensus, I am sure that time will provide an answer to the question you are asking me now,” Schinas said.

The former European Commission spokesman rejected the “negative” interpretations given to his portfolio, emphasizing that aside from migration it also embraced education, culture, employment, security, health and equality.

“Europe will always be a land of asylum,” he said, adding “But I must also be very clear that those who are ineligible for asylum will have to leave.”

So it’s an “extremist” position to connect quality of life in Europe with limiting Third World migration.  Europe would not be Europe, nor would there be anything worth protecting if it did not limit the number of non-Whites wanting to live there.

There are well over one billion Africans today, and two-thirds of them want to emigrate, which means if Europe completely opened its doors to just African migration, hundreds of millions of unskilled, welfare-seeking Africans would flood in.

Even the most radically unhinged liberal would have to recognize that inviting that many Africans into Europe would turn it into Africa without alleviating any of the problems they leave behind in Africa.

Even the relatively small number of Third World migrants that have flooded Europe in the last five years — allegedly around 2 million — has had a devastating effect on many countries.  Allowing another 10 million migrants in would be the equivalent of dropping nuclear bombs on European cities.

But to point out any of these facts is “extremist” and “toxic”, and just may hurt the “feelings” of an African who dreams of living one day in Europe among “White supremacists” and “racists”.