Litigious Jews Attempt to Shakedown Lithuania for Collaborating with Nazis 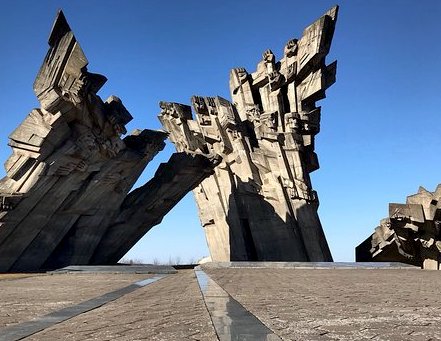 Local Jews say Lithuania’s State-run body tasked with memorializing Holocaust is attempting to absolve Lithuanians of ‘substantial complicity’ with the occupying Nazis in the mass murder of Jews during WWII:

Lithuania’s state body for preserving the memory of the Holocaust broke the country’s laws against denying that genocide, local Jews said.

The controversy surrounding the Center for the Study of the Genocide and Resistance of Residents of Lithuania is the latest in a series of actions that the country’s critics say is a government-sponsored campaign to exculpate its people from its substantial complicity in the murder of 85 percent of the country’s 170,000 Jews.

The Center published last month a text claiming that “the Lithuanians operated against the will of the Germans” during World War II and that “the residents of occupied Lithuania in 1941 didn’t understand ghettos as part of the Holocaust.”

On March 28, the Jewish Community of Lithuania published on its website a harsh condemnation of the Center’s claims, threatening to take legal action unless it is retracted.

The text, the community said, “contains features which are crimes under the Lithuanian criminal code, namely, denial or gross belittlement of the Holocaust.”

The Center’s text was a defense of Jonas Noreika, the wartime governor of the Lithuanian Šiauliai district under the Nazis. Many historians believe he oversaw and profited personally from the dispossession and murder of that district’s Jews.

Last month, a Lithuanian judge dismissed as “ill-based” an American Jew’s lawsuit against the center, demanding it take down a plaque commemorating Noreika.

“Noreika belonged to the anti-Nazi underground of Šiauliai which rescued Jews, Noreika helped those who rescued Jews,” the Center’s text also said.

So basically, if a country denies that it was complicit with the Nazis to “genocide” Jews during WWII, then they are guilty of Holocaust denial.  This isn’t just about questioning the sacred kabbalistic 6 million number; it’s about rejecting the idea that every country occupied by the Nazis during WWII was complicit in “exterminating” Jews, an accusation that jewish groups have leveled at virtually every European country at this point.

Despite receiving billions in reparations from Germany, these jewish groups are hoping to implicate all European people, regardless of what side they were on in the war, in the so-called Holocaust.  Ultimately, the Jews will probably pass a Holocaust Reparations Tax for all members of the EU.  A condition of EU membership will depend on collection of this tax, regardless of messy details about who killed whom.  The EU needs to accept responsibility for the Holocaust because individual countries like Lithuania are too ‘antisemitic’ to admit complicity and pay up without being sued.