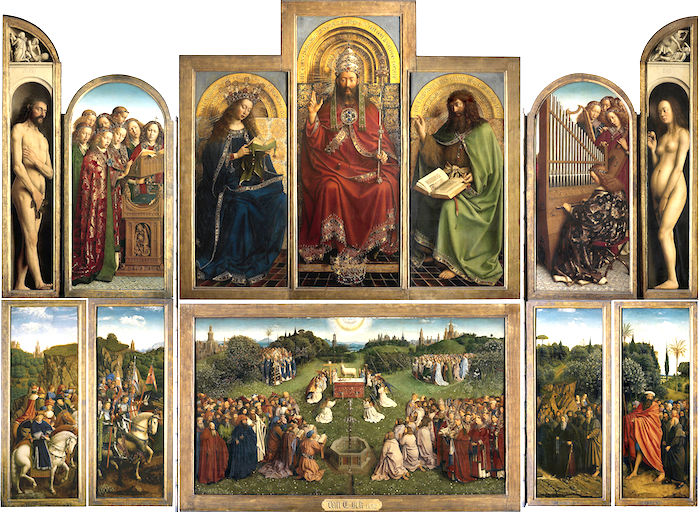 A recent staging of the controversial play, “Lam Gods,” in Gent, Belgium, featured a naked man and woman simulating the sex act in front a group of young children on stage:

The children, a choir, were also well supervised and the parents were aware of the spicy content, it sounds further. “We explained to the children that it is only theater. They are just two naked people who like to see each other. ”

Director Milo Rau sees no problem, he says to VTM Nieuws. “We have a lot of naked, but Adam and Eve were also naked. 600 years ago, the painting Lam Gods was also a scandal. But that’s the way God created us. “

This blatant attempt at sexualizing young, school-age children is right out of Aldous Huxley’s “Brave New World,” and it’s being done for one purpose only — to control young impressionable Belgians through sexual liberation.  From a young age they are taught that sexual liberation is the ultimate form of “freedom”, but it is actually a form of social control where they learn to become slaves to their sexual urges.  And anyone who opposes this form of “liberation” will be deemed a reactionary “fascist”.

Children are being taught the lie that adults who merely “like each other” behave this way, a complete distortion of reality that is meant to encourage promiscuity and a series of sterile, child-less relationships that will ultimately lead to alienation and depression.

But it’s comforting to find out that these children were “supervised” and their parents had given their prior consent beforehand.  If this is what “supervised” children in Belgium are doing, we can only imagine what children are doing behind their parents’ backs.  Subjecting your children to live action pornography passed off as “art” is exactly how the Jews have debased our culture for the last 100 years, and we are still falling for it.