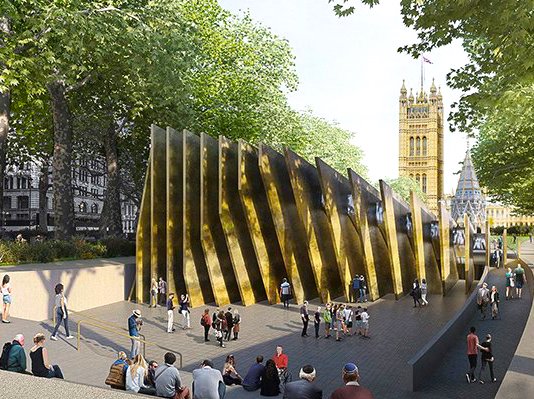 In 2016, then-prime minister David Cameron announced a project to build a “striking” Holocaust memorial in London “beside the houses of parliament,” a location that proved to be a serious bone of contention:

To Cameron, the purposely chosen Westminster location was to “act as a permanent statement” of Britain’s “values as a nation,” resonating for “generations to come.” Some opponents however, saw it as yet another example of “Jewish lobby’s” alleged stranglehold over British politics.

It seems like Cameron’s attempt to educate the public about “the darkest hour of humanity” has brought poisonous antisemitic sentiments to the fore, and unintentionally turned the monument into a symbol of ideological struggle that both sides are determined to win.

Three years on, the discussion has shifted from residents’ concerns over quality of life, to age-old conspiracy theories and the rising plague of antisemitism.

…To Jewish bodies ranging from the Campaign Against Antisemitism to Christians United For Israel, the need to make a stand against antisemitism overrides all others. CUFI claims to have “seen evidence of antisemitism from some opponents,” including “conspiracy theories about Jews trying to claim the site and impose their will on the government,” claims that the memorial was designed to spread “Zionist propaganda” and objections on the grounds of “politics” and “Palestine.”

With just days to go before the planning permission deadline, the government’s Holocaust Memorial Foundation – which is spearheading this development – is of the belief that “the national Holocaust Memorial and Learning Centre will reaffirm Britain’s commitment to stand up against antisemitism, prejudice and hatred in all its forms.”

For the likes of CUFI the choice is clear, boiling down to one question: “Is 7% of Victoria Tower Gardens worth more than honoring the 6 million Jews who were brutally murdered during the Holocaust, and the hundreds of thousands of British and Commonwealth soldiers also lost their lives?”

Jews are erecting Holocaust museums all over the formerly White world, in large cities like London and Washington, D.C. — but even smaller places like Naples, Florida.

When the Holocaust museum goes up, there is a tacit understanding that it a symbol of Jewish power in that conquered area, much like planting a flag or cross on conquered land in the past.

Of course, Jews delight in that power, but they don’t want the goyim to think they have that kind of power — yet.

It’s not that the Jews in the U.K. don’t want to have a “stranglehold” on British politics — they clearly do — rather, they just don’t want to make that “stranglehold” too obvious at least until they’ve consolidated so much power that complaining about that power or doing anything about will seem futile.

But Jews have a bad habit of always pushing too hard, too fast, and when they do, the goyim become “antisemitic”.

For now, all British politicians must now ask themselves, “But is it good for the Jews?”