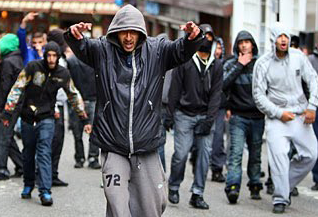 A Muslim man has become the first person in the Netherlands to be arrested, prosecuted and fined for sexually harassing women on the streets of Rotterdam:

The Rotterdam court convicted and punished someone for sexual harassment on the street for the first time. Everon El F., 36, was given two conditionally suspended fines of 100 euros each for harassing eight women in two separate incidents during the summer, NU.nl reports.

Sexual harassment on the street became a punishable offense in Rotterdam at the start of this year. El F. is the first ever Dutch man who had to appear in court for this crime.

On two different days during the summer, El F. called after women, followed them, blew kisses at them, made hand gestures at them, and in one case sat down very close to a woman on a public bench. The city’s enforcers witnessed this. A number of the women expressly stated that they were not interested in the man’s approaches, a number ran away.

El F. told the court that he will never harass women on the street again. “I meant it as a compliment, I did not know it was punishable”, he said. He told the judge that he is single and wants a girlfriend. That’s why he said things like “Hey beautiful lady” and “Hey baby” to the women. “They were very beautiful”, he said. “Really good vitamins for your eyes.”

The judge said that saying things like “hey beautiful lady” or “hey baby” are not punishable, but El F.’s actions like following the women and blowing kisses at them are.

Research by the Erasmus University Rotterdam previously showed that almost all women in Rotterdam between the ages of 18 and 45 are faced with sexual harassment on the street. The city therefore adapted its General Local Regulation to make this a punishable offense and hired more enforcers. Amsterdam did the same, but no suspects have been arrested yet in the capital.

Of course, Dutch women have been brainwashed by feminism to no tolerance for unwanted sexual advances by predatory Muslim men.  These Dutch feminists fully support Third World immigration, diversity, and multiculturalism, but they don’t like to deal with the real life reality that comes with it.  Muslim men see western White women as whores, but the liberal Dutch feminists don’t have a problem with that just as long as they don’t treat them like whores on the street.

It’s hard not to notice how the Dutch authorities often let Muslim rapists to walk free, allowing for “cultural misunderstandings” as a valid defense, but these same authorities don’t have any tolerance for non-violent street harassment such as whistling and cat calling.  Perhaps they think that if they crack down on Muslims whistling at women, that will deter them from raping the women when the whistling fails to get the reactions they desire.  But since this new law will affect only Muslim men, it will have to be discontinued because of its racist implications.