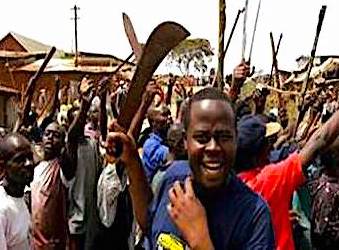 President Emmanuel Macron has appointed ‘researchers’ to carry out a two-year investigation into the role of the French army in the Rwandan genocide that is still a source of tension between Paris and Kigali 25 years later:

The nine-member commission will have access to presidential, diplomatic, military and intelligence archives, the French presidency said on Friday, after Macron met members of an association supporting survivors of the genocide.

“The goal is to deliver a report which will be published in two years time … and will be accessible to all. It will scientifically evaluate, on the basis of archives, the role that France played in Rwanda from 1990 to 1994,” the presidency said.

Macron’s predecessor François Hollande declassified presidential archives on the subject in 2015, but researchers have complained that only a fraction of the classified documents have surfaced and say a conclusive account on the role played by France is yet to be produced.

Rwandan President Paul Kagame has accused Paris of being complicit in the bloodshed in which Hutu militias killed around 800,000 Tutsis and moderate Hutus.

While Paris has acknowledged mistakes in its dealings with Rwanda, it has repeatedly dismissed accusations that it trained militias to take part in the massacre.

However, during a visit to Rwanda in 2010, then president Nicolas Sarkozy, did acknowledge France made “a serious error of judgment, a sort of blindness when we didn’t foresee the genocidal dimensions of the government”.

The two countries broke off diplomatic ties in 2006 after a Paris judge accused Kagame and nine aides of shooting down former president Juvenal Habyarimana’s plane in April 1994 — the catalyst for the massacre. Rwanda rejected the charges.

During that 2010 trip, Sarkozy also said a French rescue mission in under a U.N. mandate to provide safe zones, had been too little and too late. The killing started in April 1994, and the French arrived in June.

It is inconceivable that any non-White people have ever committed “genocide”.  In fact, the term “genocide” was made up by a Jew, Raphael Lemkin, who was involved in the kangaroo court popularly know today as “The Nuremberg Trials”.  Lemkin, of course, gained notoriety as a leftist radical during the Spanish Civil War when he looked to get Franco’s “fascists” charged with “crimes against humanity” for crushing the jewish-supported communist insurrectionists.

Apparently, only White people “hate” intensely enough to kill anyone who is not White, especially Jews, Africans, Arab Muslims, Latinos, and Asians.  And if it at first looks like a genocide has been committed by, say, Rwandans, chances are there is a “hidden White hand” like the French Army manipulating the genocide behind the scenes.  And given how much Macron has demonstrated his hatred the ethnic French people, it isn’t surprising that he’s hiring “experts” to lay more guilt on the French, which will ultimately lead to paying billions of euros to the Rwandans for “reparations”.