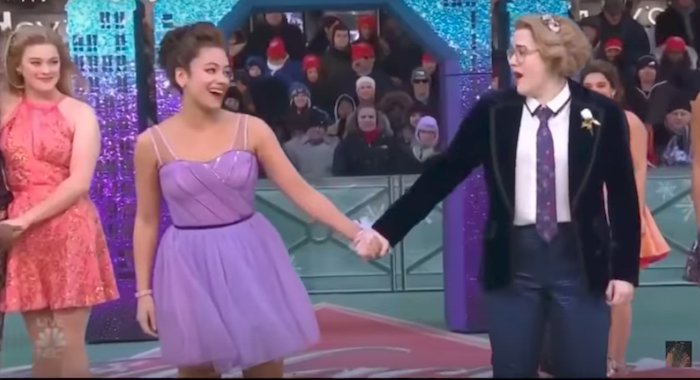 New York City’s annual Thanksgiving Day Parade set a new standard of debauchery by featuring two lesbians kissing during a re-enactment of a scene from the “hit” Broadway play “The Prom”:

During a performance celebrating the new Broadway musical “The Prom,” actresses Caitlin Kinnunen and Isabelle McCalla shared a smooch, a moment that is believed to be the first kiss between a lesbian couple broadcast during the Macy’s holiday event.

“The first #LGBTQ kiss in the Parade’s history,” cast member Josh Lamon tweeted. “We here at @ThePromMusical have never been so proud. #LoveIsLove.”

“The Prom” debuted in New York in October, telling the story of an Indiana high school student who wasn’t allowed to bring her girlfriend to prom.

The kiss elicited many positive reactions from the LGBTQ community.

User @TinaLandau said she shared tears of joy: “Two girls. Just kissed. On live TV. On the Macy’s Thanksgiving Day Parade. I suddenly cried. Lovely. Thanks given to @ThePromMusical. (& Macy’s/NBC.) & lesbians everywhere. & turkeys. For their sacrifice. But esp. @ThePromMusical.”

@Pumpkindino said she is thankful for the moment: “I finally live in a world where national TV isn’t ashamed to show this on a wildly broadcasted event.”

The jewish-controlled Macy’s department store chain which sponsors the parade has promoted homosexuality before, notably when it featured mannequins  posing as a homosexual couple in a window display at their store in Boston to promote the annual Gay Pride celebration in 2008.  So it should come as no shock to anyone that they would use the Thanksgiving Parade to further push their jewish anti-family agenda at this traditional “family” event that millions of young children are sure to be watching.

Of course, Thanksgiving was originally a White Christian event which has morphed into a generic “American” holiday to which everyone is invited.  But like America itself, Thanksgiving is no longer White and no longer Christian, and the non-White hordes use this day to celebrate jewish anti-Christian concepts like “diversity” and “inclusion”.  “New Americans” are now “thankful” that they can watch lesbianism on a nationally-televised family event, sponsored by their jewish overlords.