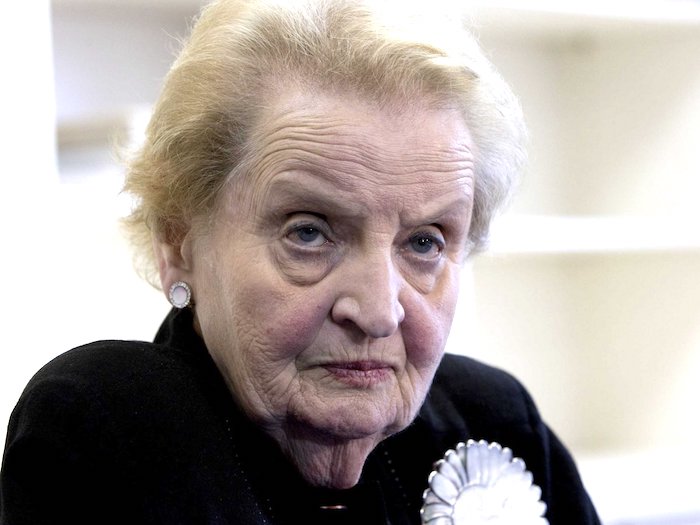 Doddering former Secretary of State Madeleine Albright accused President Trump of having a failed foreign policy that could ultimately lead to another Holocaust where millions of Jews could potentially perish in gas chambers disguised as showers:

President Trump is pursuing the same “sad and dangerous” foreign policy that led to the Holocaust and the Second World War, former Secretary of State Madeleine Albright told Congress as the president conducts a second round of talks with North Korean leader Kim Jong Un in Vietnam.

“We have seen firsthand the cost of abdication: Holocaust and global war,” Albright said Wednesday in testimony before the House Foreign Affairs Committee. “Today the enemies of freedom smell something in the air that gives them hope — the odor of America’s absence and the impression that our leader shares their disdain for democracy.”

Albright, who served as secretary of state under President Bill Clinton, said that “one has to be careful not to interfere” with Trump’s talks in Hanoi with the North Korean tyrant. But she criticized the president’s handling of his first summit with Kim in Singapore and said that Trump’s “engagement” with Kim “has yielded scant dividends to date.”

…”In other areas, the administration’s record is marked by confusion, inconsistency, a lack of diplomacy, and, in some cases, a complete abdication of responsibility,” she said.

She urged lawmakers to use their power to prevent Trump from abandoning international obligations and weakening American standing in the world.

“You did not come to Washington to preside over an abdication,” she said. “And as you know the powers of the legislative branch are set out in Article I of the Constitution. Well, 2019 is Article I time.”

No President in recent history has done more for the jewish people or Israel than Donald Trump.  His approval ratings among Zionist Jews is higher than any previous sitting president.  Trump has yet to enrage the Jews by forcing them to negotiate a peace plan with the Palestinians the way Albright’s boss, Bill Clinton did.  And yet somehow Trump is the one who is a big threat to the safety of the Jews worldwide.

A Jew herself, Albright is not doing the Jews any favors by capriciously implying that Trump could somehow bring about the extermination of millions of Jews.  This kind of irresponsible hyperbole of “another” impending Holocaust merely serves to give the public Holocaust Fatigue, a soon-to-be medically-recognized condition where people have been so inundated with references to Nazis, Hitler, and the Holocaust that they become unwilling to listen to it anymore.  And if people are no longer worried about another Holocaust, how can you get them to do what you want them to do?