Major Feminist Groups Collapse Over the Jewish Question: Are Jews White Or Not? 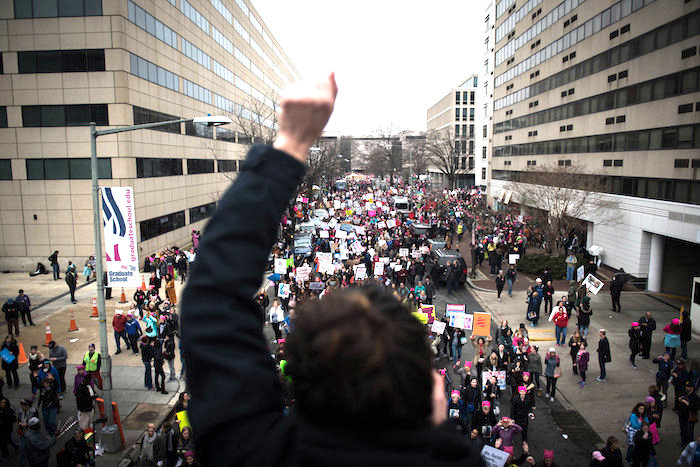 Identity politics, including a major schism over the question about whether or not Jews are White, is tearing apart the Women’s March feminist group, amidst charges of racism and antisemitism:

Within days of Donald J. Trump’s election, a diverse group of women united by their concern about the incoming administration gathered at a restaurant in New York to plan a protest march in Washington. They had seen the idea floating on Facebook and wanted to turn it into a reality.

The unity did not last long. Vanessa Wruble, a Brooklyn-based activist, said she told the group that her Jewish heritage inspired her to try to help repair the world. But she said the conversation took a turn when Tamika Mallory, a black gun control activist, and Carmen Perez, a Latina criminal justice reform activist, replied that Jews needed to confront their own role in racism.

The women who gathered that night would go on to organize one of the biggest protests in American history, remarkable not just for its size, but for its inclusive nature. The event on Jan. 21, 2017, inspired thousands of women who had never been involved in politics before to pour their energy into helping Democrats win elections this fall.

But the divisions apparent at that very first meeting continue to haunt the Women’s March organization, as charges of anti-Semitism are now roiling the movement and overshadowing plans for more marches next month.

Ms. Wruble was pushed out of the organization shortly after the march, and she now asserts that her Jewish identity played a role. She went on to help found an organization called March On, which supports local women activists.

The rift is now so dire that there will be two marches on the same day next month on the streets of New York: one led by the Women’s March group, which is billed as being led by women of color, and another by a group affiliated with March On that is stressing its denunciation of anti-Semitism.

…Ms. Mallory and Ms. Perez say they categorically condemn anti-Semitism, and that when they asked Ms. Wruble to leave the group, it had nothing to do with her being Jewish. But they acknowledged that the role of Jewish women was discussed in that first meeting.

“Since that conversation, we’ve all learned a lot about how while white Jews, as white people, uphold white supremacy, ALL Jews are targeted by it,” Ms. Mallory said in a statement to The New York Times.

The allegations of anti-Semitism are particularly painful because Women’s March organizers made a commitment from the beginning to work across racial and religious lines, and to be led by what they considered the most “marginalized” women.

Now Women’s March activists are grappling with how they treat Jews — and whether they should be counted as privileged white Americans or “marginalized” minorities, especially in the aftermath of the October mass shooting in Pittsburgh, when 11 people were gunned down at their synagogue.

This schism was inevitable because feminism was based on deceit from its beginnings as an off-shoot of the communist movement, both of which were dominated by Jews who hid their jewish identity behind their white-appearing skin.

Jewish women dominated the feminist movement, and Jews are proud of their over-representation in its leadership.  These Jews posed as sympathetic fellow “White women,” who promised freedom from male oppression, but what they actually delivered was abortion, divorce, promiscuity, unfulfilling careers, and skyrocketing sex-related crimes against “liberated” women.

Jews have masqueraded as White for the sole purpose of infiltrating and undermining White Christian societies.

The values of White Christians are historically antithetical to Jews who want to remake White societies into their own image, and to do that they have undermined the primary institutions of White values: our churches and our families.

Part of this infiltration involved the deceptive Trojan Horse of “judeo-Christian” values, which apparently includes abortion-on-demand and no-fault divorce, along with gay and transgender rights.  It’s only fitting that Jews are being “marginalized” out of this destructive movement that they themselves founded.