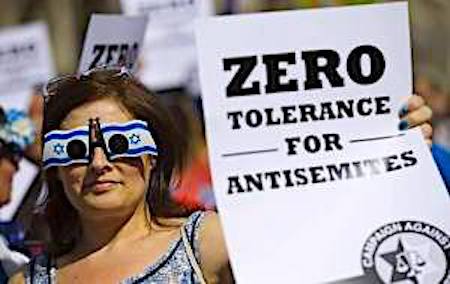 The European Jewish Congress (EJC), together with other leading Jewish organizations, has presented a joint 10-point action plan spelling out the expectations of Jewish organizations following the Council Declaration of 6 December 2018 on the fight against antisemitism and the development of a common security approach to better protect Jewish communities and institutions in Europe:

The action plan proposes crucial steps, such as closer cooperation with communities on security, improving data collection on hate crimes and creating common guidelines for countering antisemitism in education that will provide long-term positive effects for Jewish communities in Europe.

The document not only focuses on key follow-up points to the Declaration, but also develops other vital aspects of the fight against antisemitism, for example by insisting that the EU addresses antisemitism in its Human Rights Dialogues with third countries.

b. Member States should adopt specific strategies to combat antisemitism or outline concrete and precise objectives and steps on combating antisemitism as part of their national action plans against racism. Such strategies should include a solid definition with a broad understanding of antisemitism, rely on data collection to support evaluation of plans, receive sufficient political support at national and local levels and be elaborated in cooperation with local Jewish communities and organisations.

c. On the EU level, the office of the EC Coordinator on combating antisemitism needs to be significantly upgraded and equipped with sufficient qualified personnel and a budget, reflecting the challenging coordinating role that the EU has taken on in support of member states’ efforts to implement the EU Council Declaration on the fight against antisemitism (6 December 2018). Proper implementation and change of national policies will be needed to ensure a decline of antisemitic expressions and prejudices. In order to facilitate even better coordination amongst the Member States, the EU ought to consider creating in the future an EU Council Coordinator on Combating Anti-Semitism, modelled after the mandate of the EU Counter-Terrorism Coordinator.

d. Several EU Member States have already appointed national coordinators, some (like Germany and France) have equipped the offices with significant personnel. Other Member States should follow their example and appoint contact points for the Jewish community at national level to ensure the horizontal implementation of policies (education, security, data collection, training etc.)…

There seems to be nothing in this plan about how the Jews themselves need to change their own behaviors which are causing this alleged rise in antisemitism.

Instead of obsessing about what the goyim are saying, perhaps the Jews should start listening to their critics and back off from their nation wrecking agenda.  The Jews are the only ethnic group in the world that demands special laws be enacted to protect them from any and all critics.  That fact alone is the cause of the antisemitism about which the Jews are so worried.

Time is short for the Jews to accomplish their destructive goals, which is why they are pushing so hard for these draconian laws to silence anyone who objects to their treachery.  They smell blood in the water as their White host nations continue to decline by a thousand small cuts of their liberal agenda.

What big event do the Jews have planned in the near future to guarantee universal sympathy for them as victims?

How many jewish victims are they willing to sacrifice in order to leverage their ultimate hate crime laws?