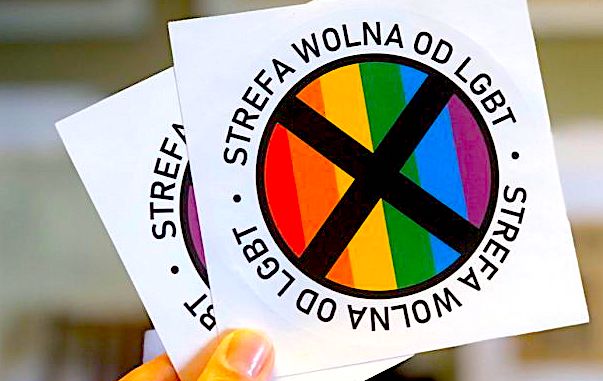 Inside their June 24 edition, The Gazeta Polska magazine, with a readership of over 110,000, has included stickers showing a black cross over a rainbow flag with the words “LGBT-free zone” written in Polish:

“We do not protest against the LGBT ideology, but we do strongly disagree on imposing it by force on anybody,” said Gazeta Polska’s editor in chief Tomasz Sakiewicz, in a statement to the ABC.

Activists and some politicians criticised the move, saying the stickers promote hatred and intolerance and could incite violence against the LGBT community.

Cecylia Jakubczak, of Kampania Przeciw Homofobii (KPH) — which translates to Campaign Against Homophobia in Polish — said the stickers will affect the LGBT community in Poland “both physically and psychologically”.

“The message that it sends is pretty much straightforward: There is no place for LGBT people in Poland,” she told the ABC.

“The LGBT ideology-free zone is a zone of freedom of speech, tolerance and respect for people who think differently,” he said.

…Georgette Mosbacher, the US ambassador to Poland, tweeted that she was “disappointed and worried that some groups use stickers to promote hatred and intolerance”.

“We respect freedom of speech, but we must collectively stand on the side of values such as diversity and tolerance,” she wrote.

In response, Gazeta Polska’s editor, Mr Sakiewicz, tweeted that “being an activist in the gay movement does not make anyone more tolerant“.

“Poles love freedom and have known the word tolerance for centuries,” he added.

In his statement to the ABC, Mr Sakiewicz said while “homosexual people have the full right to live a normal life and to enjoy their rights fully”, the LGBT movement — which he likened to Communism and Nazism — is seeking to “destroy the traditional society, fight religion and restrict freedom of speech“.

“The LGBT symbol has recently become inseparable from the mockery of faith, attacks on Christian temples and the humiliation of Catholics,” he said.

“Let us respect people, let us respect homosexuals, but let us oppose the madness that deprives people of their fundamental rights.”

The leadership of the international LBGT movement is top heavy with Jews, which accounts for its familiar rhetoric of victimhood, false accusations of opponents, and appeals for tolerance of the unacceptable.

And like Jews, the intolerant LGBT activists hate Christianity for not allowing them the “normalcy” status they covet which would ultimately give them the power to indoctrinate and sexually abuse our children by normalizing pedophilia, which is the end game of their death cult.

Poles, of all people, don’t need to be lectured on so-called “tolerance”.  Over the last 1,000 years, they tolerated the presence of the largest jewish population in Europe, much to their own detriment.

The Jews, through their sharp business practices, kept the Polish peasantry in virtual enslavement for centuries, while the corrupt, paid-off aristocracy looked the other way.  And to add insult to injury, the Jews dominated the Communist Party before and after WWII, sending thousands of “dissidents” to their deaths.

Poland, unlike western Europe, can see the jewish menace rearing its ugly head once again and has no interest in repeating history.