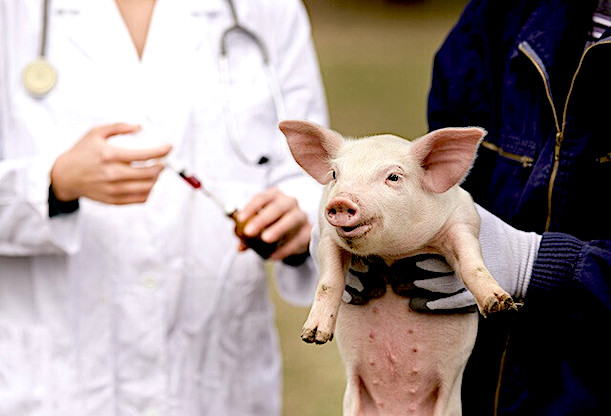 Many Jews are more concerned that the much-touted COVID vaccines are kosher — that pork has not been used in their development — than they are that the vaccines contain controversial and potentially dangerous mRNA technology never before used in humans:

In an effort to allay as many fears and concerns as possible, the manufacturers of several coronavirus vaccines have announced that no pork products have been used in their products, and that the vaccine is therefore kosher.

Many vaccines for other diseases use or once used pork gelatin as a stabilizer, and several companies have switched to other, non-pork stabilizers in order to reassure kosher and Halal consumers.

Among the companies to have made such an announcement regarding their coronavirus products are Pfizer, AstraZeneca, and Moderna, all of which have contracts to supply the Israeli government with vaccines, according to the Associated Press. The Chinese pharmaceutical companies SinoPharm and Sinovac did not respond to AP’s inquiry on the matter.

However, Rabbi David Stav of the Tzohar rabbinical organization told AP that such an assurance was actually unnecessary, since an injected product (as opposed to one ingested via the mouth) did not have to be kosher according to the Torah’s laws. “According to Jewish law, the prohibition on consuming pork or using it only applies when the pork is used in the ‘normal manner,’” he said. “If the substance is injected rather than eaten, there is no prohibition and thus no issue, and this is especially the case when we are concerned about preventing disease.”

So Jews are afraid that the COVID vaccines might contain pork, while the Catholics are worried that the vaccines were developed using aborted human fetal tissue.

But neither group seems concerned that these vaccines contain revolutionary nanotechnology that could literally change their DNA structure permanently — or that all the animals on which these vaccines were tested either were seriously sickened or died.

And according to the wise Rabbi Stav, somehow pork magically becomes “clean” when you inject it directly into the bloodstream of a Jew — so why not add some shellfish to the vaccines while they’re at it?

Kosher or not, Jews in Israel — depending on the survey you trust — are overwhelming skeptical about these insufficiently-tested COVID vaccines — it should be obvious by now that they were clearly meant for culling the goyim.

The Jewish press has proudly pointed out all the major COVID vaccines ‘just so happen to be’ developed and overseen by Jews — so they must know the dangers involved — and they must have addressed the issue of how to ensure that Jews are not subjected to unnecessary risk.

On 9-11, the Israeli messaging service, Odigo, sent out warnings to Israelis in New York City that a major attack was imminent — while everyone else was left in the dark — and because of these warnings only 4 Israelis were caught in the WTC and died that day.

We would hope that the ever-vigilant Israelis have implemented such a warning system with the vaccines — or more simply just use saline placebos for the valuable sayanim they wish to preserve.