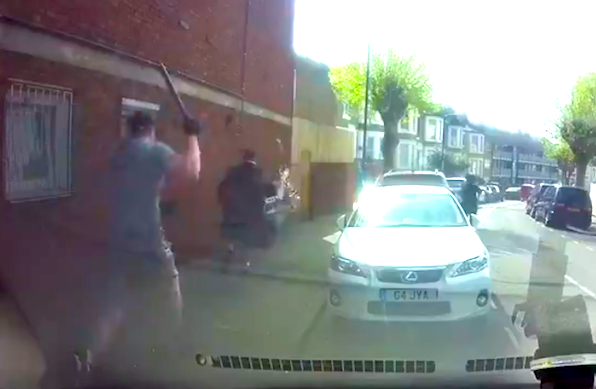 A car’s dashboard camera just so happened to catch what appears to be an Orthodox Jew allegedly being chased down the sidewalk in Stamford Hill, England, by a man with a big stick:

The Jewish Community Council of Northern London is complaining about an increase in crime in the community targeted against Jews.

In a recent tweet, the JCC tweeted, “Crime in the community continues to increase” and then posted a video of an Orthodox Jewish man racing away from an individual pursuing him with a large rod.

“This is just one of many shocking incidents today which have occurred in the past few month [sic],” the JCC tweeted. “We appeal to @MPSHackney @MPSStamfordHill to act now and reassure the community with fast responses and extra patrols.”

In February 2019, just two months ago, a 69-year-old Jewish man was beaten in an apparent hate crime. The suspect in the crime, a 44-year-old man, attacked the 69-year-old victim after asking him if he was Jewish.

At the time, Jonathan Greenblatt, CEO of the Anti-Defamation League, weighed in on the incident via Twitter. He said, ““#AntiSemitism overseas continues to rise & we cannot allow this to go on. We stand with the UK Jewish community & everyone fighting against this #hate.”

There are around 300,000 Jews living in Britain, according to the most recent survey. The Jewish community stretches back to 1066, when the first Jews arrived with William the Conqueror’s invading Norman army.

There’s an old Russian proverb: “The Jew always tells you what happened to him, but never tells you why.”  Reporting these kinds of fake “hate crimes” does not serve the interests of Jews anywhere.  These Orthodox Jews clearly think that it’s still the Middle Ages, and that Jews are being chased out of every country in Europe by angry pitch-fork-wielding mobs.  No one today walks up to obvious Jews in a jewish neighborhood and asks them if they are jewish, then proceed to chase them down the street and beat them with a stick.  This video looks more like a “Tom & Jerry” cartoon.

Notice how the jewish “victim” walks back up the sidewalk after the “attack” as if he’s perfect fine, and right at the end of the video, he sneaks a look right at the dashcam in the car.  Seriously, the whole thing looks like a clumsily conceived enactment that no one except a paranoid Jew could possibly lend any credibility to.  This kind of silliness does not benefit Jews in any way, and it just serves to cast doubt on any so-called “hate crimes” that they seem to report virtually every day in the media.  If Jews are truly getting chased down the streets of Europe just for being Jews, maybe it’s time to think about moving to Israel.