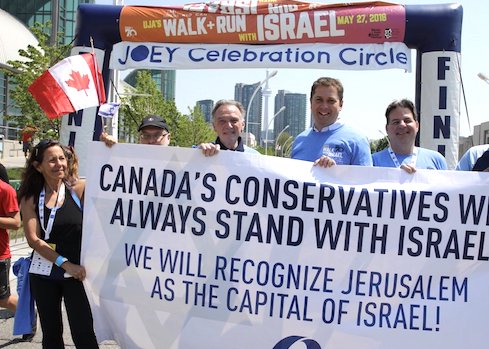 Scheer, whose Tories are neck and neck with the Liberals in the latest public opinion polls ahead of elections in October, is a staunch supporter of Israel who could potentially align with US President Donald Trump on several key issues, including Iran.

“Canada’s Conservatives recognize the obvious fact that Israel, like every other sovereign nation, has a right to determine where its capital is located,” the party said on its website in February 2018, describing the party as “a strong voice for Israel and the Canadian Jewish community.”

A Tory government led by Scheer “will recognize Jerusalem as Israel’s capital when we form government in 2019,” it said.

In May 2018, Scheer took to Twitter to denounce a missile attack on Israel by Iranian forces in Syria, calling the Jewish state “a steadfast Canadian ally and a democratic stronghold in the Middle East.”

Scheer, who will turn 40 on May 20, has also pledged to list Iran’s Revolutionary Guards as a terrorist entity, join the US ballistic missile defense program, and bolster Canada’s icebreaker fleet to keep Russia in check in the Arctic.

On Tuesday, Scheer opened his election campaign with a foreign policy speech promising a tougher stance on China.

“I will deal with China with eyes wide open,” he told the Montreal Council on Foreign Relations.

“My goal is better relations. My goal is more economic opportunity. But that can only come after we make a stand. And I will,” he said.

Justin(e) Trudeau, Canada’s answer to Barack Obama, has done what he was hired to do by his handlers: push the radical marxist social agenda, which includes replacing the White population with Africans, but in doing so has made Canada the object of derision except among the most extreme Left.  The scandals that Trudeau has been immersed in could be the excuse to vote him out of office, but like Obama, he’s rightly seen, like most Liberals, as weak on Israel and too sympathetic to the Palestinian cause, and with the upcoming confrontation with Iran looming, Netanyahu is going to need a more “reliable” ally in Canada.

Enter Andrew Scheer whose first order of business is to kiss Sheldon Adelson’s ring and recognize Jerusalem as the capital of Israel, after which he will back the U.S. and Israel vis a vis Iran, the next “existential” threat to Israel that needs to be neutralized.  Of course, the purpose of Scheer could merely be to send a message to the limped-wristed Trudeau that it’s time to grow a backbone or else, but why waste any more time with Trudeau when Scheer will put Canada completely in the corner of the neo-cons and Kushner’s “peace plan”, along with satisfying Canada’s White silent majority which is willing to push war in the Middle East if it means no more trannies in their bathrooms.