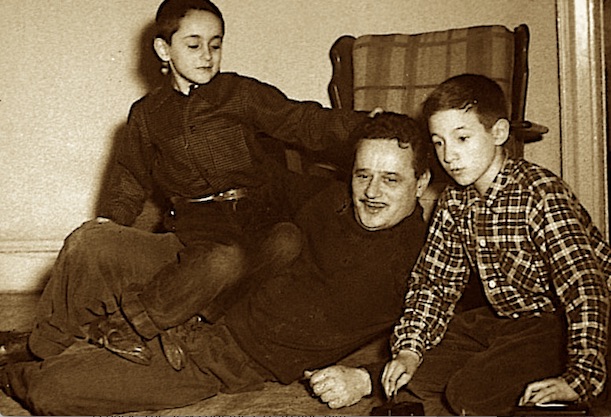 Not surprisingly, it was a communist Jew from the Bronx, Abel Meeropol, the son of Jewish-Russian immigrants, who wrote the lyrics to the infamous song, “Strange Fruit,” about the lynching of Blacks in the American South, popularized by Billie Holiday, whose birth name was also decidedly Jewish:

In the late 1930s….Meeropol “was very disturbed at the continuation of racism in America, and seeing a photograph of a lynching sort of put him over the edge.”

Meeropol once said the photograph “haunted” him “for days.” So he wrote a poem about it, which was then printed in a teachers union publication. An amateur composer, Meeropol also set his words to music. He played it for a New York club owner — who ultimately gave it to Billie Holiday.

When Holiday decided to sing “Strange Fruit,” the song reached millions of people. While the lyrics never mention lynching, the metaphor is painfully clear:

Southern trees bear a strange fruit,
Blood on the leaves and blood at the root,
Black body swinging in the Southern breeze,
Strange fruit hanging from the poplar trees.

Pastoral scene of the gallant South,
The bulging eyes and the twisted mouth,
Scent of magnolia sweet and fresh,
And the sudden smell of burning flesh!

Here is a fruit for the crows to pluck,
For the rain to gather, for the wind to suck,
For the sun to rot, for a tree to drop,
Here is a strange and bitter crop.

In 1999, (((Time magazine))) named “Strange Fruit” the “song of the century.” The Library of Congress put it in the National Recording Registry. It’s been recorded dozens of times…

…New York lawmakers didn’t like “Strange Fruit.” In 1940, Meeropol was called to testify before a committee investigating communism in public schools. They wanted to know whether the American Communist Party had paid him to write the song. They had not — but, like many New York teachers in his day, Meeropol was a Communist.

Journalist (((David Margolick))), who wrote Strange Fruit: The Biography of a Song, says, “There are a million reasons to disparage communism now. But American Communism, one point it had in its favor was that it was concerned about civil rights very early…”

“Abel Meeropol’s pen name ‘Lewis Allan’ were the names of their children who were stillborn, who never lived,” says his son, Robert Meeropol. He and his older brother, Michael, were raised by Abel and his wife, Anne Meeropol, after the boys’ parents — Ethel and Julius Rosenberg — were executed for espionage in 1953.

Julius and Ethel Rosenberg were sentenced to death for conspiring to give atomic secrets to the Soviet Union. The Rosenbergs had also been Communists…

Robert Meeropol says that in the months following his parents’ execution, it was unclear who would take care of him and his brother. It was the height of McCarthyism. Even family members were fearful of being in any way associated with the Rosenbergs or Communism.

Then, at a Christmas party at the home of W.E.B. Du Bois, the boys were introduced to Abel and Anne Meeropol. A few weeks later, they were living with them.

Billie Holiday’s birth name was Eleanora Fagan, suggesting that her unwed mother, who was a prostitute, was probably part Jewish herself — which accounts for Holiday’s light complexion — or perhaps her family’s former slave owners were Jewish, which was very common in the South.

So a Jew from New York City — Meeropol — who had never set foot in the South — saw a photograph of a lynching and automatically assumed that the Black who had been lynched was innocent of any crime — the ‘victim’ of irrational White racists.

Thousands of Whites have been lynched in America — and Europe — going back centuries, but apparently every single one of them was justified — if anyone should be afraid of the mere sight of a noose, it’s White people.

In fact, the first famous lynchings in colonial America were White men who were turncoat loyalists to the British crown — long before Blacks were brought here as slaves in any significant numbers.

But Jews like Meeropol have been instrumental in creating the myth in America that White Southerners were irrational racists who liked to terrorize, rape, and lynch Blacks for no reason whatsoever other than they were Black.

Just as the Jews likewise claim that irrational, violent White Christians have historically like to round up Jews with torches and pitchforks, put them all in a barn and burn it down — for no reason whatsoever other than they were Jews.

If White people are such irrational, violent people who cannot control their murderous impulses, how was it possible for them to build every great advanced civilization the world has ever known?

And why is it that despite having this ugly reputation for being violent racists, every person of color in the world never the less still wants to live among us in our ‘dangerous’ racist nations?

The irrational racist White man was an invention of Jews in Hollywood and the Communist Party — which the McCarthy hearings proved, not surprisingly, to be one and the same.