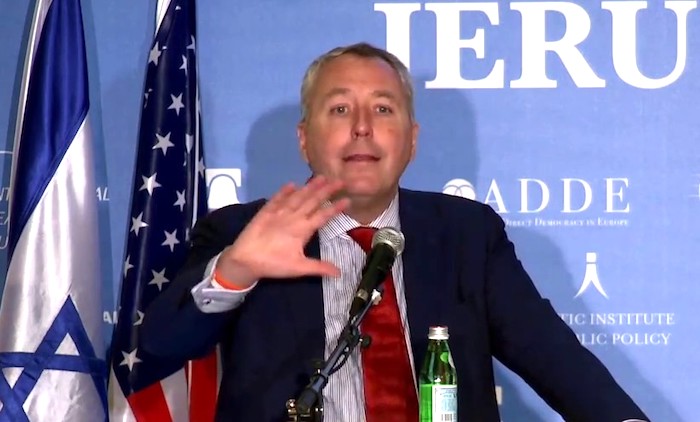 Steve Bannon, President Trump’s former right hand man, has enlisted jewish attorney Mischael Modrikamen in Belgium to help him “unite the Right” in Europe but also make sure The Movement steers away from “racism” and “antisemitism”:

In Belgium, the new partnership has provoked anger from the far right, which resents the criticism by Modrikamen, and the left, which has accused Modrikamen of betraying the fight against racism.

But for many, the main response is puzzlement over Bannon’s choice of a relatively minor player on the nationalist scene to serve as The Movement’s executive director when he clearly possesses the heft to bring in bigger names.

“It’s not an obvious choice and, frankly, I don’t have an explanation for it,” said Nicolas Zomersztajn, editor in chief of the left-leaning Jewish Belgian Regards magazine.

Modrikamen said it came down to “an instant click” when the two men met earlier this year. Bannon has not replied to JTA’s questions on the partnership.

Whatever the reason for Bannon’s choice, the fact that Modrikamen, 52, is Jewish and has led the charge against anti-Semitism in his country can’t be bad for the movement he heads — his members are regularly accused of xenophobia, racism and anti-Semitism…

With 40 million unemployed in Europe and “empty national coffers,” Modrikamen said in a 2016 film, “newcomers are predominantly young, uneducated, unqualified men — mostly Muslims, with different, archaic values that we can’t change. Our wives, our daughters, our mothers were chased like prey by the hordes of primitives in Cologne, and that is only the beginning,” he said, referencing large-scale sexual harassment and assault by North African men that took place in the German city on New Year’s Eve 2015.

Modrikamen rejects allegations made in the Belgian media that with this video, he took his Popular Party from centrist to far right. But he conceded that his political positions have “hardened” in recent years…

In his own country, the leading far-right party, the Flemish Interest, “are not people I’m particularly keen on having contact with because of their history,” he said. Nazi collaborators supported the movements that eventually evolved into the party of today.

The Flemish Interest is not the only Belgian party with collaborators among its supporters, he said, but “there has been a stream of incidents with this party concerning Nazi symbols and anti-Semitic speech.”

In 2014, he said about his party in an interview for Le Soir: “We condemn the far right, we condemn racism. We are part of the democratic camp.” In 2010, the French edition of the news site Slate called Modrikamen “Belgium’s Sarkozy.”

…The Movement is planning an international summit next year, he said. Support for Israel is currently in the statutes of The Movement.

Last month, Gerolf Annemans, a European Parliament lawmaker for Flemish Interest, said his party would not join The Movement because of Modrikamen, whom Annemans called a “charlatan.”

Marcel de Graaff, the leader of the Dutch Party for Freedom in the European Parliament, also said his party “distances itself” from The Movement.

“We welcome Steve Bannon’s support,” he said, “but within The Movement there are people whom we absolutely do not want to be associated with.”

…The anti-Semitism allegation against Bannon is “a cheap smear, just like the one against Donald Trump, the most pro-Israel president in U.S. history, who has Jewish grandkids. I have never heard or smelled anything remotely anti-Semitic from Steve. Do you think I’d partner with him if I did? Come on,” Modrikamen said, waving his hand.

Like Bannon, who has said “ethno-nationalists” are not welcome in The Movement, Modrikamen has to walk a fine line between promoting the idea of strongly individualist nation states and tight borders on the one hand, and the racism and xenophobia prevalent on the far right.

“I want to protect The Movement from extremists, from racists. I want to be its guardian in a sense,” he said. And while Modrikamen excludes neither Flemish Interest nor the Party for Freedom, “pushback is not surprising” given his selective approach.

Steve Bannon is a kosher conservative who cut his teeth at Breitbart News, which serves as the jewish-approved hangout for the kosher “far Right” in America.  Under the watchful eyes of Jews, Breitbart allows conservative Whites to complain about immigration, Muslims, Black crime, and the homosexual agenda but steers them clear of the Hidden Jewish Hand behind it all.  Now Bannon is trying to peddle this same business model in Europe and has enlisted this high-profile jewish attorney to give his “movement” credibility among concerned Jews.

The Jews seem to have resigned themselves to the idea that there will be a “far Right” resurgence in Europe caused by their ruinous immigration policies and multicultural agenda.  They know how to deal with “antisemitic” Muslim migrants, but their greatest fear is “antisemitism” among Whites who wake up to the jewish complicity in the destruction of Europe.  This multicultural or civic “nationalism” that Bannon and the Jews are selling will fail as a “movement” because it is neither White nor Christian.