Meet ‘Weev’: The Fake ‘Neo-Nazi’ Jew Behind The Antisemitic ‘Zoombombing’ Of Jewish Webinars 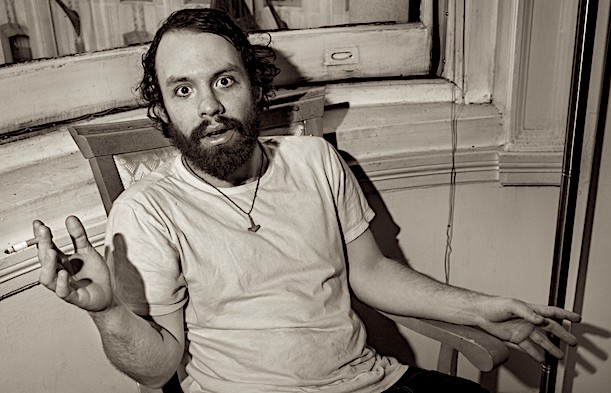 This past week a number of jewish groups have had their webinars interrupted by antisemitic trolls, but upon further investigation, it turns out that these incidents appear to have been masterminded by a Jew by the name of Andrew “Weev” Auernheimer, the ‘brains’ behind the cartoonish ‘neo-Nazi’ site The Daily Stormer:

On March 24, 2020, a white supremacist named Andrew Alan Escher Auernheimer, best known by his pseudonym “weev,” invaded a Zoom webinar about anti-Semitism that was hosted by a Massachusetts Jewish student group, pulled his shirt collar down and exposed a swastika tattoo on his chest, the Anti-Defamation League (ADL) reported Sunday.

The FBI is now getting involved with stopping Zoombombing, which has been spreading in recent weeks like the coronavirus, as Zoom video conferencing has become widespread during the pandemic. In addition to the webinar incident, the Bureau reported that in late March 2020, during a Massachusetts-based high school Zoom class, an unidentified individual dialed into the classroom, yelled a profanity and then shouted the teacher’s home address in the middle of instruction.

Andrew Auernheimer, whose mother told Newsweek he has Jewish relatives on both sides of his family, is nevertheless the webmaster for The Daily Stormer.

According to the ADL, “weev” has a long history of exploiting technology to gain attention to his anti-Semitic views. In 2016, he claimed credit for sending white supremacist fliers to thousands of networked printers on college campuses around the country, saying the Jews are destroying the country “through mass immigration and degeneracy.” In two subsequent waves of “fliering,” he depicted Jews being killed and raped and called for supporting and defending acts of violence against anyone he perceived as anti-white. He also participated in a harassment campaign against Jewish journalists on Twitter.

…According to Molly Boigon of the Forward, “Zoombombing has affected synagogues, schools and even the restaurant chain Chipotle, which was Zoombombed by a participant who broadcasted pornography to hundreds of attendees during a public conference.”

A Health Geography Ph.D candidate named Sophie Geffros tweeted on March 23: “Um. Weird internet nazis appear to have invaded my shul’s ‘How to Run A Seder’ Zoom workshop and spammed it with pornography and swastikas! What in the [expletive]!!!”

Cindy Goldberg, 56, a school board president, told Boigon in a phone interview she had been waiting for a Zoom meeting to start a few nights earlier, when hackers started posting cartoon images of Hitler, photos of Nazi soldiers and swastikas on screen.

As we have previously reported, the very jewish Andrew ‘Weev’ Auernheimer has been a leading figure in the so-called ‘Alt-Right’ and ‘White nationalist’ movements.

And Weev has consistently advocated the use of violence against his fellow Jews and other non-White groups, trying to goad and incite naive, alienated Whites into senseless, counter-productive acts that play right into the hands of powerful jewish supremacist groups like the Anti-Defamation League and the World Jewish Congress.

It is remarkable that despite the fact that this Jew Weev has been the webmaster behind the Daily Stormer, tens of thousands of loyal White followers continue to donate money to it.

The propagation of irrational, cartoonish, violent ‘antisemitism’ is an essential part of the jewish agenda, and that’s exactly what Weev, through the Daily Stormer, provides.

How exactly does childishly disrupting jewish Webinars with antisemitic trolls somehow help promote the cause of ‘White nationalism’?

Do they honestly think that this will scare Jews into moving to Israel?  Seriously?

The only thing that such behavior will accomplish is provide the ADL and SPLC with more ammunition to convince our compliant lawmakers about the ‘necessity’ to pass draconian laws against all ‘antisemitism’ so that no public discussion, no matter how legitimate and rational, of the Jewish Question will be allowed.

That’s ultimately what the Jews want, and Weev is doing everything he can to make sure that they get it. 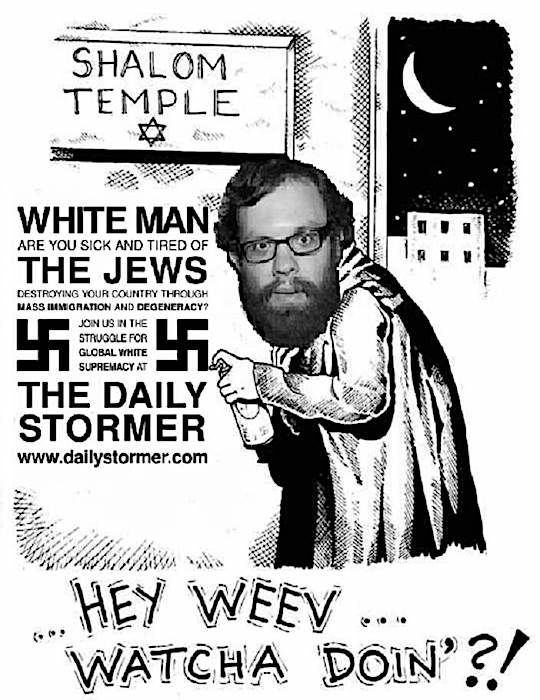