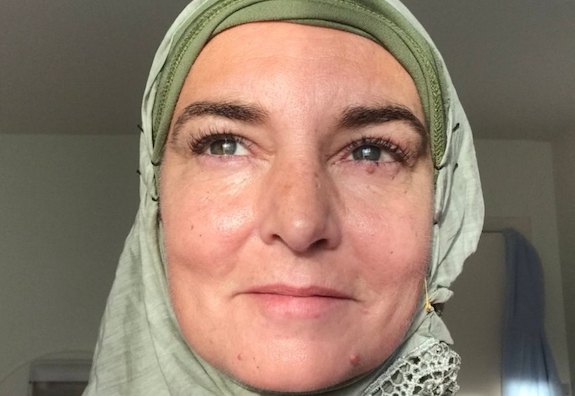 In yet another bizarre twist in the tortured and demented life of feminist pop singer, Sinead O’Connor, she has renounced Catholicism and converted to Islam:

Sinead O’Connor has converted to Islam and changed her name to Shuhada which means ‘martyrs’ in Arabic.

The Irish rockstar, who was ordained a priest by a fringe Catholic group in the 1990s, announced the news on Twitter where she shared a pictured of her wearing a hijab.

The mother-of-four, who has struggled with her mental health, wrote: ‘This is to announce that I am proud to have become a Muslim.’

She added: ‘This is the natural conclusion of any intelligent theologian’s journey. All scripture study leads to Islam. Which makes all other scriptures redundant. I will be given (another) new name. It will be Shuhada.’

She spelled her name with an apostrophe at the end, writing her full name as Shuhada’ Davitt.

O’Connor also changed her twitter profile image to a Nike tick with the caption ‘wear a hijab. Just do it.’

The singer said she was given her first hijab by her friend Elaine and ‘got chills all over’ her body when she put it on.

Last Friday O’Connor posted a video of herself singing the Islamic call to prayer called the Adhan.

She wrote: ‘Here is my attempt at singing the Azan [sic]. I got some pronouncition [sic] wrong because emotions took me from my page…but there’ll be hundreds of others onstage to come.’

O’Connor later added: ‘Sorry re all the mistakes in my Azan…1st attempt. When I’ve practised it 30 times I’m Gonna make the world stop turning.’

Since announcing her conversion, O’Connor has been inundated with welcome messages from Muslims, she said.

At 11.30pm on Thursday she tweeted: ‘Thank you so much to all my Muslim brothers and sisters who have been so kind as to welcome me to Ummah today on this page. You can’t begin to imagine how much your tenderness means to me.’

O’Connor last changed her name in 2017 to Magda Davitt, saying in an interview that she wished to be ‘free of parental curses’.

She was ordained a priest by the Irish Orthodox and Apostolic Church in the 1990s, shocking members of the Roman Catholic Church where women can’t be priests.

O’Connor has had a fraught relationship with religion. In a July 2007 interview with Christianity Today, she stated that she considers herself a Christian and that ‘God loves everybody.’

In an October 2002 interview, she credited her Christian faith in giving her the strength to live through and overcome the effects of her child abuse.

In 2011, she slammed the Catholic Church over the child sex abuse scandal, in an article for the Sunday Independent.

She labelled the Vatican as ‘a nest of devils’ and called for the establishment of an ‘alternative church’, saying that ‘Christ is being murdered by liars’ in the Vatican.

An alleged victim of child abuse, Sinead O’Connor has now embraced the teachings of Mohammed, an avowed pedophile.  This certainly is the “logical conclusion” for any mentally unstable person to come to.  But this is what happens when we allow non-Whites into our countries — the most vulnerable end up worshiping their strange gods which will always lead them astray.

O’Connor reduced the essence of Christianity to the false platitude, “God loves everybody,” which shows just how little she understood about it, but then again, she’s apparently looking for the father figure she never had, not God.  Now she has embraced “Allah” the moon god who wants to kill anyone who isn’t foolish enough to worship him.

If her conversion doesn’t help advertise the insanity of Islam, nothing will.