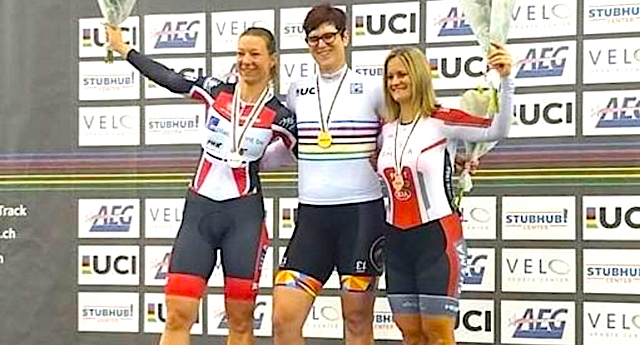 (The Daily Signal) An assistant professor of philosophy at the College of Charleston in South Carolina, who thinks he’s a woman, won the women’s 35-39 age bracket at the 2018 UCI Masters Track Cycling World Championships in Los Angeles:

A biological male who identifies as a transgender woman won a women’s world championship cycling event Sunday in California.

Rachel McKinnon, an assistant professor of philosophy at the College of Charleston in South Carolina, won the women’s 35-39 age bracket at the 2018 UCI Masters Track Cycling World Championships in Los Angeles.

Allowing biological males who identify as transgender women to compete in women’s athletic events has been a controversial subject, as critics argue that it puts female competitors at an inherent disadvantage.

McKinnon did not immediately return an email seeking comment for this report.

In January, USA Today quoted McKinnon as arguing against requiring biological males to suppress testosterone as a requirement for competing against women.

“We cannot have a woman legally recognized as a trans woman in society, and not be recognized that way in sports,” McKinnon told the newspaper, adding:

“This is bigger than sports and it’s about human rights,” McKinnon told USA Today.

“By catering to cisgender people’s views, that furthers transgender people’s oppression. When it comes to extending rights to a minority population, why would we ask the majority? I bet a lot of white people were pissed off when we desegregated sports racially and allowed black people. But they had to deal with it.”

Not too long ago, when we lived in a less Jewish-dominated world, this mental case would have been forcibly detained in a mental hospital against his will and medicated with thorazine so that he could do no harm to himself and others.

Today he is standing on the victor’s stand, hoisting a gold medal, and calling the rest of us bigots.

If we accept his mental derangement, then perhaps it’s the rest of us who should be locked up in the mental ward and medicated.

But he’s right about one thing — this is “bigger than sports,” but it’s not about “human rights” — it’s about the complete destruction of the rational Christian foundation of our western society.

We are now literally left guessing if what we are seeing right in front of our eyes is real or not.

Our children are being told that they are neither boys or girls, and that to think so is wrong and “prejudiced”.

A parent who raises a child without prejudice — or rational discernment — should be investigated for child abuse.