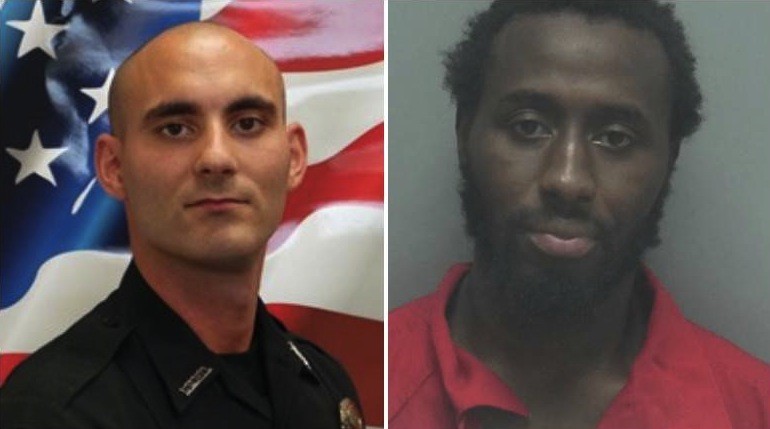 Of course if the roles were reversed, it may be today’s top story:

Wisner Desmaret, who is accused of shooting a Fort Myers police officer in the head, has a string of previous criminal cases in the Florida court system, and ICE has filed an immigration detainer against him. Officer Adam Jobbers-Miller died from his injuries on July 28, 2018, after a week of fighting for his life.

ICE confirmed to Heavy: “U.S. Immigration and Customs Enforcement (ICE) filed a detainer July 22 against Haitian national Wisner Desmaret following his arrest by the Fort Myers Police Department on charges to include attempted murder of a law enforcement officer.”

In numerous previous court cases in Florida counties – for things such as burglary and trespassing – Desmaret escaped conviction. Just days before the shooting of the officer, he was released by a judge in Sarasota County on pretrial supervision after he was accused of cocaine possession. Desmaret’s father told Fox News that his son had originally come to the United States from Haiti legally on a visa, but ICE now has filed an immigration detainer hold on Desmaret.

NBC-2 reported that Desmaret was in the country illegally.

Desmaret was described as homeless in one court document, and, records reviewed by Heavy show, cases against him were repeatedly no processed and, in some cases, were dismissed after findings of incompetency due to “intellectual disability.

There is a virtual black-out in the national media with this story for obvious reasons–it does not fit the official liberal narrative. Had this dead White cop shot this retarded Haitian with a lengthy criminal record, we would never hear the end of it.

Perhaps Desmaret was one of the thousands of Haitians who were given “temporary” visas to stay in America after the earthquake in Haiti a number of years ago during the Obama administration.

Either way, he should never have been allowed in this country under any circumstances. America has no need for someone like Desmaret–or any Haitian for that matter.

They need us–we don’t need them.