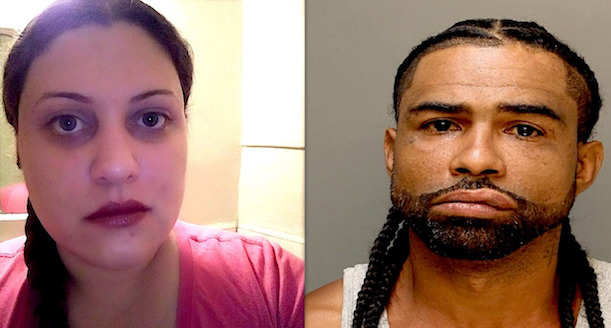 A 3-year-old girl is recovering after Philadelphia police say her own mother, Lauren Rodriquez, attacked her with a machete which the father of the child, Reinaldo Bermudez, may have used in a separate attack upon another person a week earlier:

Police say the incident happened after 8 p.m. on the 5900 block of North Mascher Street.

According to authorities, officers found the young girl covered in blood on the street.

Neighbor Pauline Williams described seeing a bloody mess after another neighbor pulled the injured child out of the home.

“I saw the daughter with her head split open from her mother with a machete,” Williams said. “Thank God for the neighbors, they all got together and they really helped that little girl.”

The young girl suffered skull fractures and multiple lacerations on her head, shoulder and knee.

She is in stable condition at St. Christopher’s Hospital for Children.

Police have not yet said what led up to Rodriguez allegedly attacking her 3-year-old daughter.

This latest attack comes after a separate machete incident on the same block last week. Police have not said if they are related, but neighbors tell CBS3 they are.

Reinaldo Bermudez was charged with aggravated assault and terroristic threats after police say he cut someone with a machete on Aug. 4 on the 5900 block of North Mascher Street. Neighbors say Bermudez is the young girl’s father.

With a name like “Lauren Rodriguez,” it’s safe to assume that the mother is a second generation Mexican, born in the U.S. to Mexican parents who wanted to Americanize their daughter by giving her a more anglo-sounding name than Lupe or Carmelita.  And from the looks of the father, he’s also a second generation Mexi-merican, with one Black parent and one Mexican parent.

Clearly, as second generation “Americans” these two lovely “integrated” citizens have made even the Black mean streets of Philadelphia a little more mean, if that’s even possible.  Historically, Blacks and Hispanics in America loathe each other, and their rival gangs have made their territories virtually unlivable for themselves and their families, as they rotate in and out of the prison system until they are murdered in some meaningless turf war.

And given that the U.S. is taking in hundreds of thousands of these new Latinos every month, we can expect this kind of “vibrancy” to enhance our once safe White suburbs in the near future.

2 Corinthians 6:17   Wherefore come out from among them, and be ye separate, saith the Lord, and touch not the unclean thing; and I will receive you.