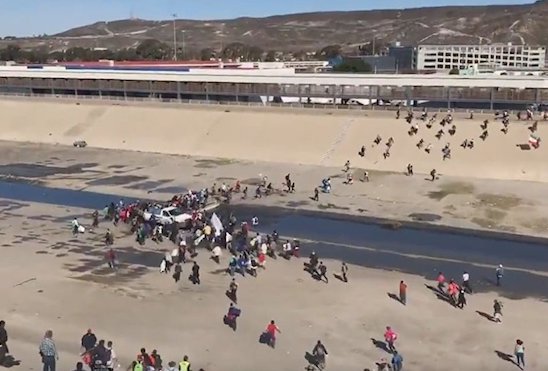 Mexico’s Interior Ministry announced that it intends to deport at least 500 caravan migrants who attempted to violently cross the border into the U.S.:

According to the ministry, the group was detained while attempting to “violently” and “illegally” cross the Mexican-US border on Sunday, forcing US border guards to use tear gas to keep them away.

The ministry added that “far from helping their objectives,” the migrants’ actions had violated the legal migration framework and could have led to a “serious incident.”

Several video clips uploaded online on Sunday show Central American migrants attempting to force their way into US territory after Washington closed the border checkpoint between the Mexican border town of Tijuana and San Diego, California.

The ministry warned that those identified as having taken part in these “violent events” would be deported immediately.

The section of the border the migrants are attempting to cross is reinforced with an actual wall.

The Pentagon deployed 5,900 troops at the southern border to deter migrants from crossing it. The White House allowed the soldiers to use lethal force against illegal aliens if needed in an order signed late on Tuesday.

Tensions in the Mexican border town of Tijuana have been running high since thousands of migrants arrived there earlier this month after trekking more than 2,500 miles from Central America.

However, they may now have to wait for months to see if their asylum applications are accepted by the US now that President Trump has pledged to keep the would-be migrants in Mexico pending a court decision on each application.

It turns out that Mexicans don’t like “diversity” any more than White Americans do, and this is something that the liberal nation wreckers didn’t anticipate.  When it comes down to it, even Mexicans who have made it into America and gotten citizenship are threatened by each and ever new Mexican or generic latino who crosses the border and further waters down our way of life and economic future.  If we can learn anything from these events, it should be that those Mexican already in America will become more and more resistant to Third World immigration as they experience for themselves the damage that it does.

And the U.S. should have stationed these troops on the border 30 years ago when this huge influx of invaders from Mexico really started gaining momentum, so stopping these caravan migrants is hardly going to save America after tens of millions have already crossed illegally.  On top of that, almost another million are entering the U.S. through “legal” immigration, and virtually none of these immigrants are White.  Eventually, they will have no choice to implement a complete moratorium on immigration if America is to survive, but it may be already too late.