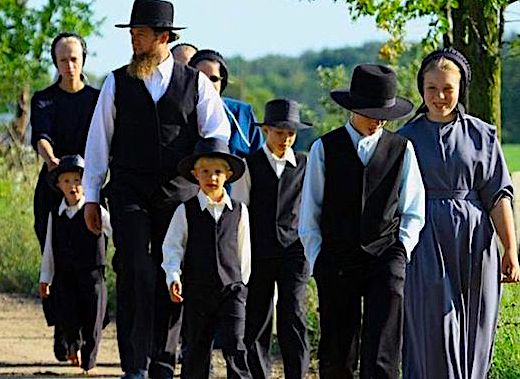 The American Civil Liberties Union of Michigan has taken up the cases of 14 Amish families whose homes have been condemned by the Lenawee County Health Department for not being up to code for their water and sewer systems:

The health department has filed lawsuits against the owners of the properties for what it calls a lack of adequate water and sewer systems.

In one particular complaint lodged against a family at 10806 Ingall Highway, Morenci, the health department alleges the property is not up to health code. A complaint filed on the matter states the property was inspected in June 2015.

Amish do not use indoor plumbing or electricity. They typically use an outhouse and pump water by hand or gas motor.

The health department’s complaint stated that sewage and gray water, wastewater from bathtubs and sinks, were being disposed of on the ground and posed a danger to the general public’s health.

The county health code prohibits sewage from being discharged on the ground. Water supply systems must be constructed to provide “potable water which will not endanger the health of the user …” and can meet the demands of all users, according to the code.

The code allows the health department to declare dwellings unfit for habitation if they do not meet the standards of adequate water and sewage systems. The department can also issue an order requiring people to vacate the premises if these conditions are not met. It is unlawful to live at a residence when this order has been levied….

Letters were sent to the residence in 2016 to comply with the health code, obtain permits and cease using the outhouse. An application for sewage disposal was returned incomplete, according to court filings. More letters were sent in 2016 about the incomplete application.

In January 2017, the family responded through their attorney that they did not intend to comply. This summer an order was issued declaring the property unfit for habitation.

The health department’s complaint alleges the noncompliance harms neighboring properties and children are at high risk.

The county has asked the court that the owner bring the property into compliance or the structure be demolished….

The ACLU, along with a legal team from Wright & Schulte, LLC, a Dayton, Ohio, law firm, are providing their services pro bono.

Answers and counterclaims were filed for the Amish families on Wednesday in Lenawee County Circuit Court. Essentially, the ACLU has counter-sued or sued the county back. Counterclaims against the county include religious discrimination that violates federal and state constitutions and the federal Fair Housing Act….

Richard Schulte, a civil trial lawyer at Wright & Schulte, pushed back against the county’s claims that the Amish’s water and sewer systems present dangers to the public’s health.

“We’re convinced the water is safe,” he said. “We’re certainly open to what they have to say but in this case they have produced nothing to any of these families their water is unsafe, and again, whether they’ve done any damage to the environment or harmed anyone else in this county.”

Amish properties are meticulously clean compared to non-Amish farms.  And while the average home occupied by Blacks in Detroit may be ‘up to code’, they certainly aren’t fit for human habitation, but no one is going to evict them.

There is an open but undeclared war against the Amish in America because they refuse to participate in Mystery Babylon, and if real estate speculators can’t price them out of their own areas, the counties can use cynical and draconian enforcement of their ‘health’ codes to force them out.

But why would the anti-White and anti-Christian ACLU jump to the defense of the Amish here?   Quite simply, there are a lot of similar cases involving Orthodox Jews who violate ordinances and codes in much more urban and suburban settings, and a legal precedent with the Amish will ultimately be used to protect the Orthodox Jews who openly disregard simple rules of hygiene, unlike the Amish.