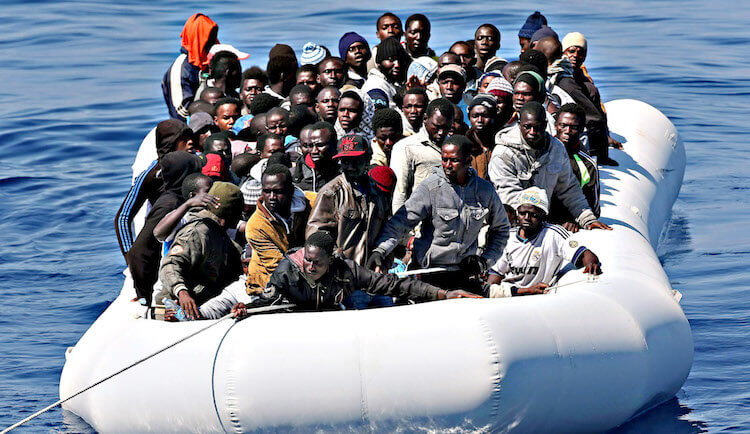 Black Africans who die in their attempts to illegally invade Europe via un-seaworthy vessels are being used by the controlled media to blame Whites for not offering more “help” and assistance:

The deaths at sea of a mother and child have further exposed the flaws in a pact between Italy and Libya that has led to thousands of migrants being forcibly returned to the chaotic north African country.

Their bodies were found last week in the drifting wreckage of a boat off the Libyan coast by rescuers from the Spanish ship, Proactiva Open Arms. A woman from Cameroon was also found clinging to a piece of wood.

Sharing harrowing images of the bodies and the terrified survivor, the NGO accused the Libyan coastguard of abandoning the trio after they refused to be taken back to Libya, the main point of departure for migrants attempting the perilous crossing to Europe, with the rest of the intercepted group.

Libya’s coastguard has been patrolling the Mediterranean sea since striking a deal with Italy in February 2017 that empowered it to bring migrants back to a country where aid agencies say they suffer torture and abuse. The deal, which entailed Italy providing funds and equipment, was made by Marco Minniti, the former interior minister from the centre-left Democratic party, in an attempt to stem the migrant flow.

So when a Black African who cannot swim drowns after getting on an un-seaworthy boat to cross the perilous Mediterranean in a pathetic attempt to illegally enter Italy – it’s Italy’s fault somehow.

This seems to be a recurrent theme when it comes to all Black failings – somehow the White man is always responsible.

The media will never hold a non-White responsible for their actions – Blacks fail only because Whites fail to be fully “human”.

Boatload of African Migrants Threaten to Kill Whites Who “Rescued” Them