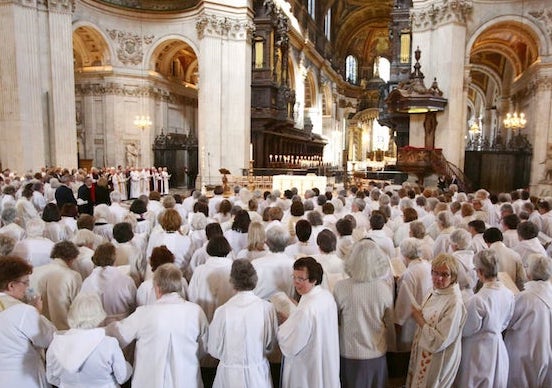 A recent survey conducted by the University of London revealed a sharp increase in hate crimes, both verbal and physical, against Christian clergy all across England:

One in ten members of the Church of England clergy has been the victim of violent behaviour in the last two years, a government-funded survey has found.

The same proportion say they are experiencing more anti-Christian hate crime than they did two years ago.

The survey also found that more than two-thirds have been on the receiving end of verbal abuse and one in five has experienced threatening behaviour over the last two years.

The findings, released on Friday, also showed that clergy who have suffered violence are more likely to find their work “more challenging” than they did previously.

The research was carried out by academics at Royal Holloway, University of London, with £5,000 from the Ministry of Housing, Communities and Local Government, amid fears that increasing secularisation, the declining status of clergy and abuse scandals may be impacting on the way clergy are treated.

Of the respondents who have experienced threatening behaviour in the last two years, more than one-third have been threatened more than once.

In the vast majority of cases, the threat was to harm the cleric personally, but 20 per cent had a relative threatened and 35 per cent had experienced threats to church property.

The reason respondents most commonly gave for verbal abuse they received – cited in one-quarter of cases – was because they had declined to give money to someone who had asked them for it.

In just over one-sixth of incidents, respondents said the motive was anti-Christian hate crime, and alcohol and drug problems were cited in 13 per cent of incidents.

Where verbal abuse had taken place many times, the reason most commonly given – in 41 per cent of cases – was mental illness.

Almost one-sixth of respondents said they had seen a rise in online hate crime and four per cent of male clergy said they had been threatened online.

The proportion of respondents who felt clergy were shown less respect than two years ago increased with age.

Jonathan Gabe, Professor of Sociology at Royal Holloway, said: “The clergy have a difficult job, especially when faced with the risk of violence, as documented in our survey.

“The research suggests that further thought needs to be given as to how best to help clergy manage when faced with such violence.”

More than 540 clergy from south-east England, excluding London, took part in the survey.

If these were Jews been attacked in this violent fashion, there would be a national crisis with the army and police called in to personally escort every Jew in England whenever they left their homes, but because the victims are White Christians, the problems merely needs to be studied more, according to the jewish expert Jonathan Gabe whose opinion this article values.  In this new world of diversity and multiculturalism, Whites are not part of the equation, and when they are victimized, it is explained away as the result of “institutional racism.”

A thousand years ago, European Christians did not lay down or turn the other cheek when faced with a Muslim invasion that threatened all of Christendom.  Instead, they picked up their swords and drove the Muslim barbarians completely out of Europe in defense of their race and their God.  And just as the Jews aided and abetted the Muslim invasions of Europe in the past, they are at it again today, and unless Christians start standing up to these forces of darkness, they will surely be wiped off the landscape of England, the cradle of Christianity in Europe.