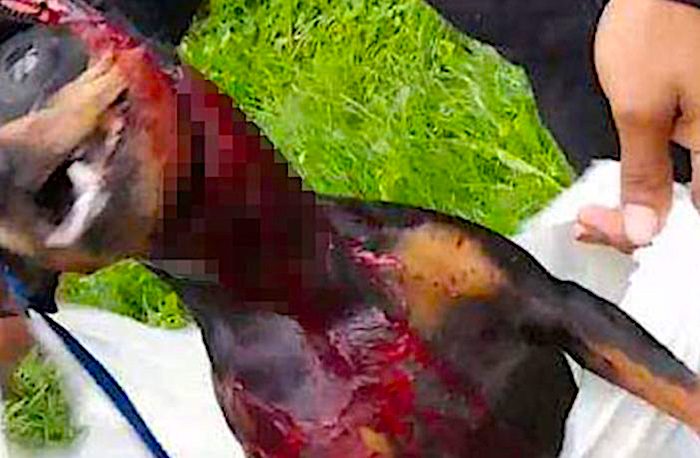 During an investigation into drug trafficking, police in Sweden discovered a video on a suspect’s phone, showing the suspect and other migrant men laughing as they torture and then knife a helpless dog to death:

Two men are being prosecuted at Skaraborg District Court for having strangled a dog to death and thus subjected it to suffering.

In connection with a drug investigation, the police searched one of the accused men’s mobile phones – and found a film of the two men and some other unknown people torturing a dog.

In the preliminary investigation, the police describe how the men tighten a strap around a small Pinscher dog’s neck and hold it up in the air. The dog is bloody and seemingly lifeless in the film. Then, it is put in a plastic bag.

One of the men is known to the police and can be heard talking and laughing in the film. “Ah brother. She lives. What the f***? Brother, I beg you. Put the knife in her”, the man says.

The men deny crimes and claim in interrogation that the dog had to be killed for various reasons. The older of the two says that the dog was sick and in pain. He wanted to make sure that it really died and says he therefore “put the knife to the dog’s neck”.

The younger man says that the dog had attacked other dogs and people and was therefore killed. According to him, the dog was shot dead with two bullets. The strap was then used to put the dog in the plastic bag.

He admits that it is him in the film, and when asked why he laughs, he replies: “I was shocked. Everyone reacts differently when in shock. I got shocked and I panicked.”

The older man is a former citizen of a Central American country while the younger man has Swedish citizenship, but has a non-Swedish accent.

As we have previously reported here, a gang of Muslims were recently arrested for an epidemic of cat maimings and torture in Sweden.

In the U.K. animal abuse has become so rampant that pet stores may no longer be selling kittens and puppies.

Of course, the politically correct crowd refuses to acknowledge that this new commonplace crime among migrants has nothing to do with race.

These new “Swedes” will eventually become “integrated” and become indistinguishable from Old Swedes, at which point they will no longer wantonly and cruelly torture cats and dogs.  Or so the liberal narrative goes.

Not only do these migrants mistreat animals, they perform the same levels of cruelty to their human victims in Sweden whom they gang rape, violently rob, drug, kidnap and murder.

And yet these stories of cruelty toward animals illicit far more outrage from the Swedes than stories about their women and children treated the same way by these “New Swedes.”

Either way this will all be written off as a small “cultural misunderstanding” until the next outrage.