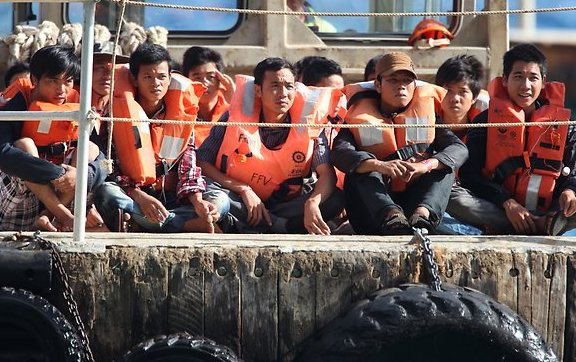 A recent investigation of Australian asylum seekers has uncovered massive misuse of government benefits, which includes over $5 million in cash benefits being sent back to their friends and families in their home countries:

Thousands of illegal immigrants who arrived in Australia by boat have sent $5million in welfare payments designed for the most vulnerable migrants back home to their families.

About 8,000 asylum seekers are currently being investigated by authorities for lying about their financial situation in order to receive the payments.

Of those, 44 cases have been earmarked by national security agencies because of the size of the overseas transfer – including one refugee who claimed to be stateless and sent more than $450,000 to Ghana and Bangladesh.

Another case reported by The Daily Telegraph involved an illegal boat arrival who transferred nearly $220,000 to Iraq and Switzerland.

The funds intended to assist the most desperate asylum seekers have cost Australian taxpayers in excess of $1.5 billion in the last five years.

Home Affairs Minister Peter Dutton said the government is intent on preventing the illegal immigrants rorting the system getting away with it.

He said: ‘These people came to Australia illegally by boat, claim to be penniless, take taxpayers hard-earned dollars in welfare and then inexplicably have access to large amounts of money that they transfer around the world.’

The government is now in the process of removing asylum seekers caught moving around significant amounts of money from the funding scheme.

Labor, meanwhile, is set to announce its policy of giving permanent protection to asylum seekers and getting rid of their temporary visas at its national conference on Sunday.

Last week, it also emerged opposition leader Bill Shorten had pushed for asylum decisions to not include considerations of the applicant’s character.

The government and the opposition are due to clash on what has been dubbed the ‘medivac bill’ when it passes through the lower house in February.

In response, Mr Dutton said: ‘Under Labor’s law, a person who has been convicted of serious offences would have to come to Australia and there is nothing the minister could do to stop it.’

Mexican invaders in the U.S. have sent billions of dollars in welfare benefits back to Mexico, and they continue to do it with impunity, so it’s no surprise that illegal invaders in Australia would pull the exact same scam. It’s a little-known fact that a robust part of the Mexican economy is based on receiving indirect welfare payments via Western Union every month.  And of course the Federal and State governments know all about it but do nothing to stop it.

Every migrant who invades America does so with the intent of sending money back to their families.  If this scam were made illegal, it would remove an incentive for them to come here in the first place.  But companies like Western Union make tens of millions of dollars every year off aiding and abetting this financial drain off the U.S. taxpayers, and their lobbyists on Capitol Hill ensure that this issue will continue to be ignored and the gravy train will continue.