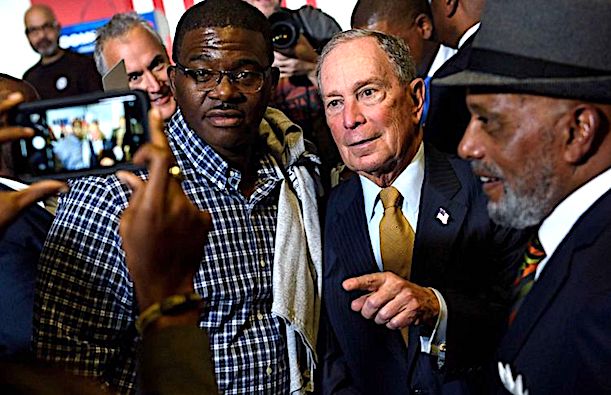 In a censored speech that Mike Bloomberg gave at the Aspen Institute in 2015, he freely admitted that it is Blacks who are causing most of the gun violence in America, and insisted that the best way to get the guns off the streets is not restricting our 2A rights to own guns but rather using simple ‘stop and frisk’ programs in high-crime areas:

“95% of your murders — murderers and murder victims — fit one M.O. You can just take the description, Xerox it and pass it out to all the cops. The are male minorities, sixteen to twenty-five. That’s true in New York, that’s true in virtually every city.

And that’s where the real crime is. You’ve got to get the guns out of the hands of the people that are getting killed. You want to spend the money on a lot of cops in the streets. Put the cops where the crime is, which means in minority neighborhoods.

And the way you get the guns out of the kids’ hands is throw them up against the walls and frisk them. And then they start [saying], ‘Oh, I don’t want to get caught.’ So they don’t bring the gun. They still have a gun but they leave it at home.

And in case, Bloomberg claims his comments here were ‘taken out of context’, here he is on a WOR radio show in New York doubling down on this comments, and going so far as to assert that Whites are disproportionately stopped by police and minorities too little:

This is one of the great jewish dilemmas: how do you blame Black gun violence on White law-abiding gun owners to justify disarming the entire White population so that no one can object to their nation-wrecking agenda?

You under-report the extent of Black-on-White violence to mislead Whites into thinking that Blacks aren’t nearly are violent as they are.

You report all Latino, Arab, Jewish, and everything in between crime as “White”.

You convince White liberals they don’t need guns to defend themselves against violent Black (and Brown) crime, which accounts for well over 80% of all violent crime in America.

You never mention that the primary reason the Founding Fathers guaranteed the right to bear arms wasn’t for self-defense against criminals, or to hunt, but rather to make sure the government didn’t overstep their bounds and infringe upon your constitutionally-guaranteed inalienable rights.

Apparently, in Mike Bloomberg’s ideal America, only his body guards have the right to ‘bear arms’.

Which begs the question: why does Mike Bloomberg feel a need to have heavily-armed body guards, even when he’s not campaigning in high-crime areas?

Could it be that he’s afraid someone who doesn’t like his gun-grabbing, anti-American hypocritical rhetoric might take offense?